After 3 consecutive months of falling rates, resulting in a 38-bps decline from end-of-month October ‘18 to end-of-month January ‘19, Bankrate® showed some stability in February by closing three (3) bps higher to end the month at 4.40%. With some MSR trade levels seemingly oblivious to the rate decline, February’s stability comes as welcome news to most buyers and sellers. Likewise, volatility is having little impact on most economists who like the MBA believes that rates will make up for lost ground and by the end of 2019 will settle around 4.80%. It’s this rising rate forecast, falling prepayments and the fact that many portfolios are still out of the money that is keeping buy-side interest as strong as ever and at historically attractive execution levels. 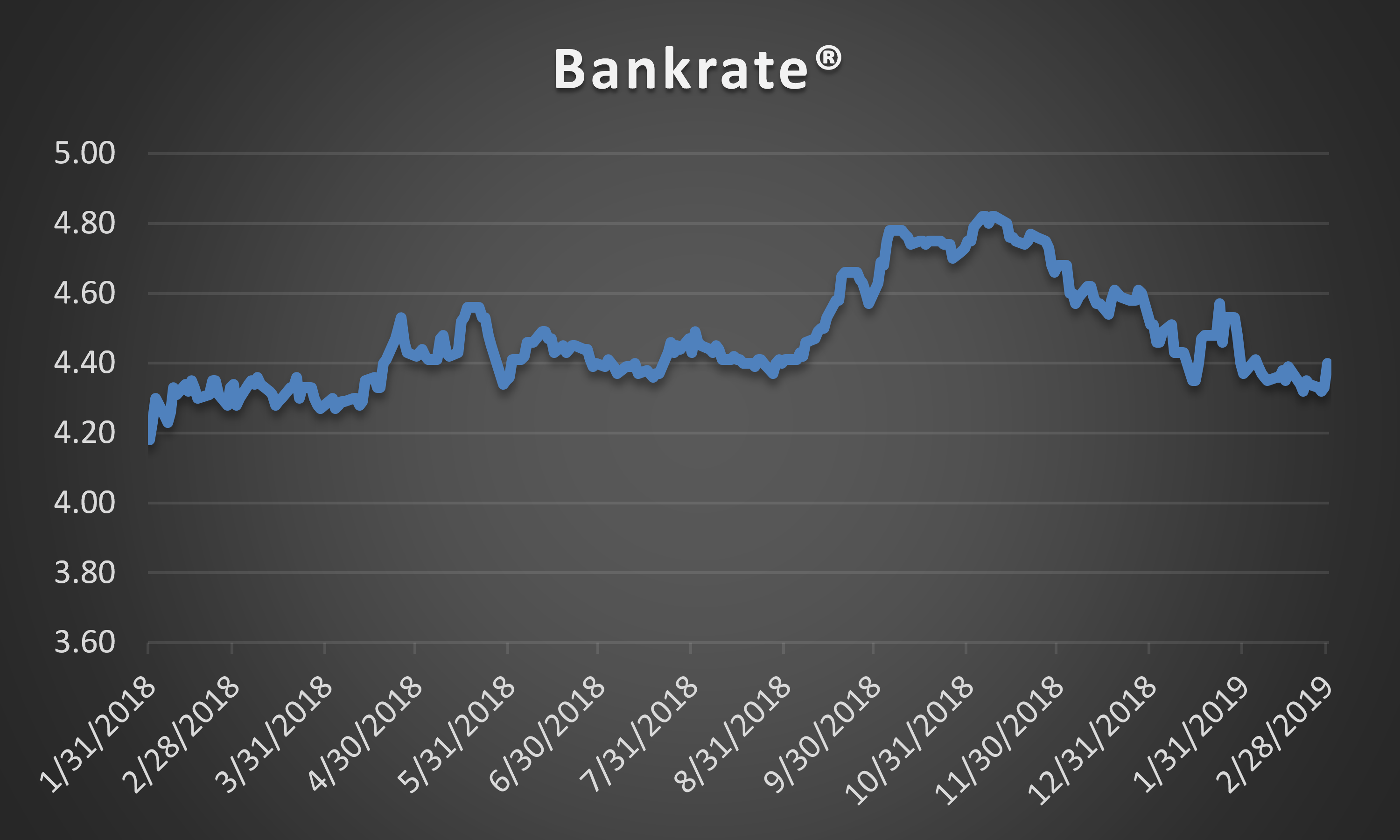 During the month of February, MBA Research released its 4th quarter of 2018 National delinquency results and its correlation to unemployment rates. The delinquency rate for one-to-four-unit residential properties dropped to its lowest level since the 1st quarter of 2000 and at 4.06% was down 41 bps from the previous quarter and down 111 bps from the 4th quarter of 2017. This occurred at the same time the unemployment rate was 3.80 percent and nearing 50-year lows. According to statistics released by CoreLogic, homeowners with a mortgage saw their equity increase by 8.1% year over year for an average increase in home equity of $9,700.

However, the same report noted that from the 3rd quarter to the 4th quarter, mortgaged homes with negative equity increased by 1.6% to 2.2 million homes which today represents approximately 4.2% of all mortgaged properties. While equity is growing, at least in the 4th quarter of 2018, debt grew faster. The renewed popularity of cash-out-refinancing, seconds, slowing home price appreciation and lower down payments on inflated purchase values is something that should be routinely monitored. 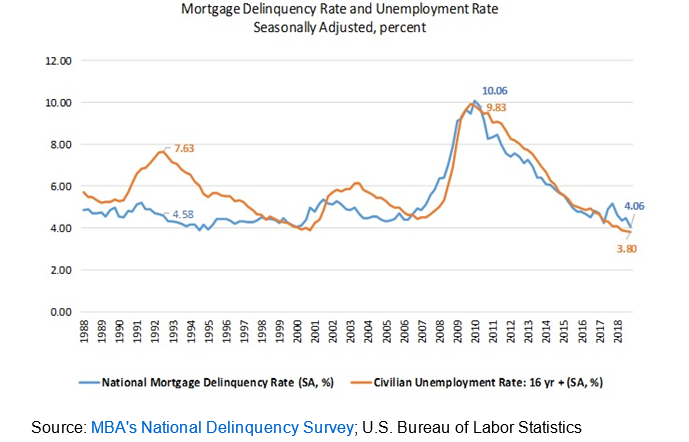 In January of this year, Conv30 MBS Prepayments hit a 10 year low of 6.6%. Due in part to the 4th quarter rate rally and aging, only the 2018 vintage 4.5% and 5.0% coupons posted an increase. Aging affects both premiums and discounts; however, premiums tend to reach their peak prepayment speeds considerably earlier than discounts thereby causing the now marginally “in-the-money” coupons to prepay faster. Likely due to a combination of seasonality, the media effect on falling mortgage rates, and another 14 bps drop in primary mortgage rates during the month of January, speeds picked up some in February but only by 10%. At an overall 7% CPR, Conv30 MBS prepayment speeds were still moderate by historical standards. Rising home prices, lack of inventory, seasonality, and burnout have been mentioned as contributing factors to the change in speeds but regardless, “for the moment” servicers can rejoice in the resulting prolonged cash flows. As we advance into March, due to seasonality and an increase in day count vs. February, projections are that March speeds will be 20% higher than February.

“Large” transactions which we define as deals containing $1 to $5 plus billion in unpaid principal balance continue to validate our very granular GSA prices. As for smaller offerings, the price/multiple spread is narrowing. Smaller offerings, defined as $500 million to $1 billion, remain the target of some larger buyers who have decided they’d rather not compete at the lofty levels currently being offered for some of the largest offerings.

The smallest packages categorized as $300 million or less in unpaid principal balance are trading at a robust pace too but at prices that “on average” range anywhere from 10 to 20 bps lower than the bid prices obtained on larger offerings. In addition to the reduced economies of scale afforded by larger MSR trades, acquisition cost is one of the reasons that smaller deals can trade at a discount to larger offerings. The legal and due diligence cost that a buyer typically incurs to acquire a portfolio can influence how a firm might bid on a smaller trade. Even so, it is the smaller trades that can often create the largest margins and in a quest for margin, increasingly we see larger buyers bidding on smaller offerings but usually with a more rigid approach to price and term negotiations. 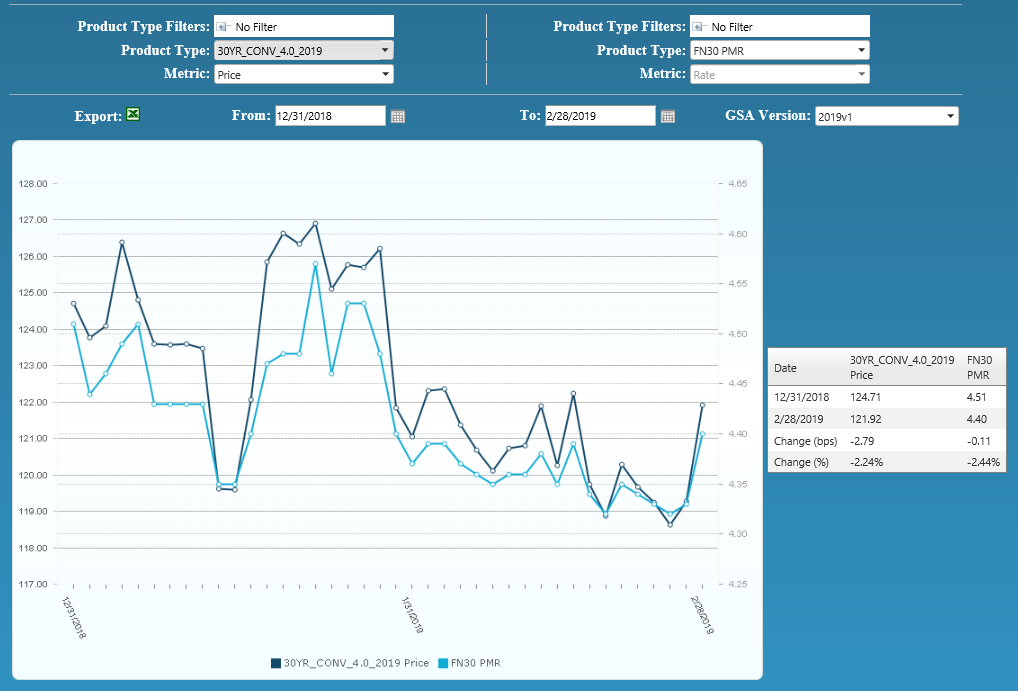