As measured by Bankrate, month-over-month primary market 30-Yr conventional mortgage rates increased by three basis points to end the month of October at 3.83%. Quarter-over-quarter, 30-Yr conventional rates experienced a slight two basis point decline. While this amount of month-over-month mortgage rate movement may produce only a minimal upward shift in value, there was also an increase in benchmark earnings rates. In comparison to the month-over-month increase in base mortgage rate, the 5-Yr swap rate which is MIAC’s benchmark for earnings rates increased in a non-parallel fashion to end the month at 2.08% or approximately eight basis points higher than September’s closing rate. Likewise, quarter-over-quarter the 18 basis point increase in the 5-Yr swap rate was in stark contrast to the quarterly change in primary mortgage rate.

Considering its influence on mortgage rates and the impact that a volatile CMS 10-Year Rate can have on MSR’s, it too needs to be a closely watched benchmark. Month-over-month the CMS 10-Year increased by just over 6 basis points which for historians is nearly 100 basis points higher than the all-time low set in July 2016.

What was even more impactful to MSR values during the quarter were the trading values witnessed on mostly larger MSR offerings which month-over-month vaulted MIAC’s Conventional 30-Yr 3.50% 2017 GSA Index north of a 4.0 multiple. 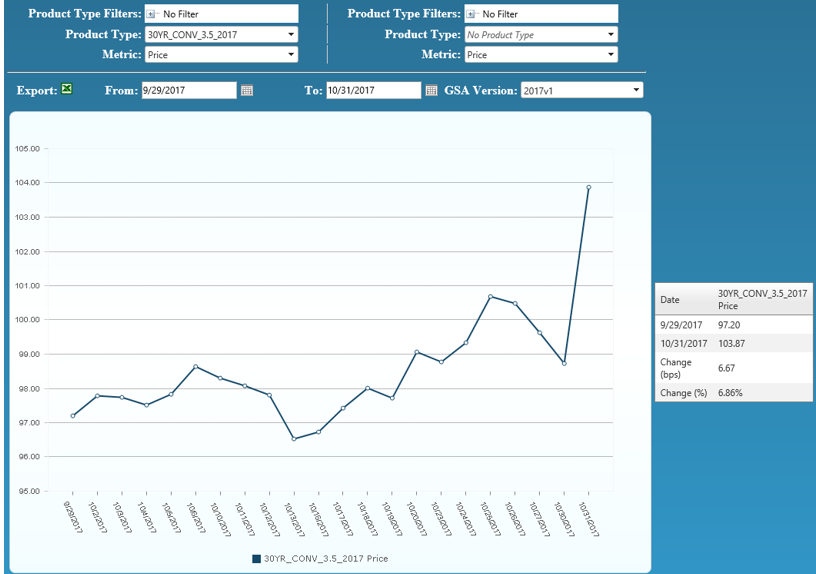 Looking to take advantage of a vastly improved secondary bulk market for Fannie Mae, Freddie Mac, and Ginnie Mae mortgage servicing rights, bulk transfers approaching $300 billion took place in the first nine months of 2017.  The fourth quarter will be no exception as numerous offerings hit the market in October from firms wanting to get one more transaction completed before end-of-year.

Counterparty net worth and the size of the offering continue to impact who bids and at what price but during October, “Conventional at-market multi-billion offerings” mostly experienced very respectable bids ranging from a 4.0 to 4.25 multiple. Low delinquency conventional 30-Yr product can trade in the mid-4 multiple range although sellers continue to experience buyer resistance at asking levels in excess of a 4.5 multiple.  The smaller conventional packages categorized as $500 million or less are seeing an uptick in trading volume as well but at prices that “on average” can be 5 to 15 basis points lower than the bid prices obtained on larger offerings.

Similarly, trading levels on mostly newer “at-market Ginnie Mae offerings” ranged in the low to mid 3 multiple range, while “stressed Ginnie Mae offerings” are subject to a much wider range that is heavily influenced by, delinquencies, geography, counterparty and potential exposure to recent storms.