From end-of-month January to end-of-month February, MIAC’s Primary Mortgage Rate decreased by sixteen (16) bps to 3.47%. Borrowers looking to benefit from the lower rates are causing an onslaught of new applications and what could be very attractive MSR portfolios in the coming months. 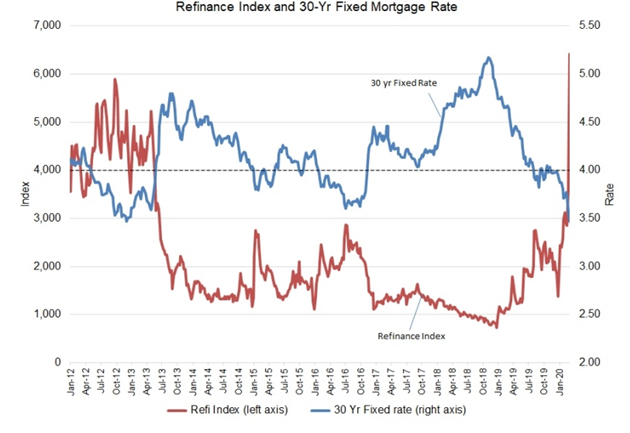 The surge of homeowners seeking to take advantage of lower mortgage rates is overwhelming lenders who are struggling to respond to inquiries and get loans processed in a timely manner. Out of self- preservation, the result is that many lenders are artificially inflating rates just to keep up with demand. With markets in turmoil and Treasury yields hitting record lows, higher rates are not the first thing that comes to mind, but it’s happening. Some lenders have been taking in as many applications at the lower rates as they can and when bandwidth constraints make it nearly impossible for lenders to manage any more, some have been turning off the spigot by increasing their rates by as much as 150 bps per day. Once caught up, the lenders are lowering their rates. With so many firms managing for bandwidth, over the first two weeks of March, the practice is driving rates higher when they should be going lower. 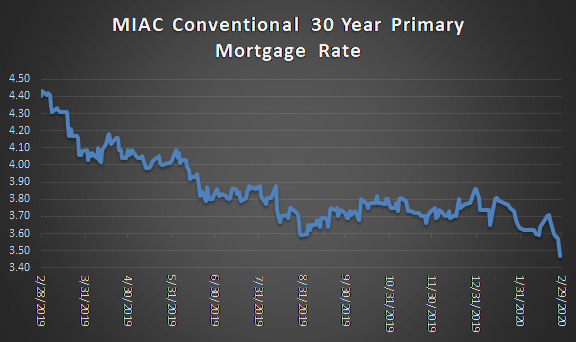 Since MIAC’s last monthly update, in a rare inter-meeting move, the Fed trimmed its benchmark interest rate to a range of 0.00%-0.25%.

In February we experienced a 16-bps reduction in MIAC’s Conventional 30 primary mortgage rate for a total Year-to-date reduction of 39 bps. Thankfully treasury yields to 30-year mortgage rates have been less than one-for-one. As more and more lenders inflate their advertised mortgage rates because of strained origination capacity, primary-secondary rate spreads have widened with the result being elevated gain on sale profits. Looking ahead, as progress is made in the fight against (Covid-19) and/or originators scale up to handle increased origination volumes, spreads should begin to revert toward historically normal levels.

Conventional 30-year agency MBS prepayments came in at a 17% CPR in February, up from a 15% CPR in January. Despite volatile and possibly artificially higher rates, expect no less than a 25% increase in actual prepayments for the month of March.

The market convention for discounting mortgage and MSR cash flows has evolved over the decades. With the regulatory environment changes after Dodd-Frank, soon these discounting methods will be common for MBS, mortgage loan and MSR investors. Here is a brief history of mortgage discounting and the forthcoming changes.
In the 1980s, the market practice was to discount each cash flow at a single discount rate. This is called the Yield-to-Maturity method. If the compounding frequency was semi-annual, the form of the YTM method was referred to as the Bond-Equivalent Yield or BEY. In the late ’80s, MBS holders wanted tools to measure the relative value that aligned with the annuity-like cash flows of an MBS security that only a tiny percentage had bullet final payments. So, practitioners migrated to a single spread to the underlying risk-free rate curve. Earlier period cash flows were discounted back at a spread to the shorter maturity rates and longer-dated cash flows to long maturity underlying reference benchmark rates. The UST bond term structure was utilized as the underlying benchmark rates. Most term structure models started with the on-the-run UST prices and yields, and through complex splines and bootstrapping methods, developed slightly distinct UST forward rate curves. Each firm’s UST forward rate curve was their underlying reference benchmark rates in the Spread-to-Price discounting process.

In the 1990s, the Soviet Union disappeared, and the Federal Government went from spending 6% of GDP on defense spending to 3% of GDP. This “peace dividend” was not offset by a reduction in taxes so the federal budget produced surpluses. These surpluses resulted in the reduction of UST debt. The 20-year bond contract discontinued and 30-year bond suspended issuance for four years. The concern in the capital markets for holders of spread products such as MBS was that the underlying benchmark rates maturity curve would disappear.

So, in the early 2000s, most market participants migrated to using the Libor/Swap forward rate curve as the underlying benchmark reference rates for MBS discounting. MIAC Analytics allowed users to choose whether they want to use a Libor OAS or a TSY OAS depending on the underlying reference forward rate benchmarks.
But with the arrival of the credit crisis in 2007, market observers saw that market participants were exchanging Libor Swap rates to UST Rates at considerable spreads. This reflected the market expectation that Libor based swaps contained considerable credit risk relative to the underlying UST risk-free rates. This basis spread could be transacted with a basis swap and active basis swap markets were created. So, MBS market participants wanted to return to using the UST instruments as the underlying risk-free rates. And with concerns of federal deficient unabated, there was ample UST debt across the maturity term structure. However, could market participants avoid the inconsistency between each analytical firm’s or investment bank’s underlying term structure forward rate curve construction?

In fact, Dodd-Frank in the USA, EMIR in Europe, and a regulatory body in the UK required that all exchanged, traded and OTC interest rate swaps and interest rate derivatives be settled with the OIS funding curve for each appropriate currency as the method for discounting and accrual.

How is the OIS curve created? In the US, it is simply the futures market rates for the overnight fed funds rate. The tenures start at overnight rates, 1-week, 1-month, etc. until 10-years. The compounding frequency is daily. 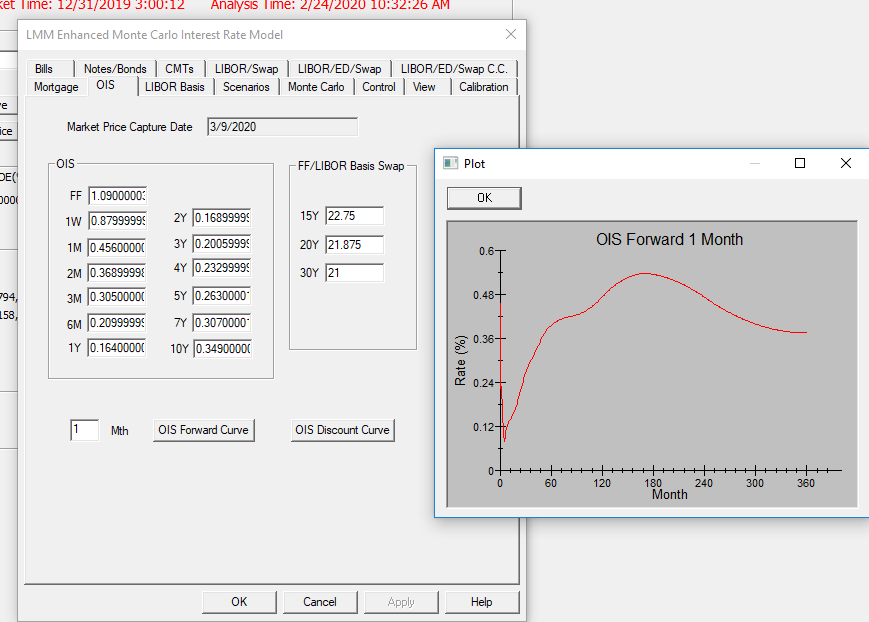 Active markets in FF futures exist today and are relied upon for discounting trillions of dollars in interest rate derivatives and spreads to the OIS such as MBS and MSR.

Secured Overnight Financing Rate is a slight variance from the Overnight Fed Funds Rate. Generally, collateralized assets use SOFR and uncollateralized assets used Fed Funds. However, a forward FF/SOFR basis swap market has already developed, and the tenures of the basis go out to 50 years. So, any market participant can simply buy a Fed Future futures contract and use an FF/SOFR basis swap of the same tenure to create a SOFR futures rate with that tenure. So, although the SOFR future rate market is just gaining liquidity and volume, it has the underlying infrastructure to make this transition to SOFR very seamless.

Because Libor swaps will be dramatically shrinking in market size and daily volume, incremental liquidity spreads will become part of the Libor swap term structure forward curve. This will reduce the usefulness of Libor forward curves to holders of MSRs who want a truly risk-free funding curve to discount their projected MSR cash flows. MIAC Analytics and MIAC MSR valuation methods will be migrating to using a SOFR/OIS Funding curve as our risk-free rate curve for discounting MSR cash flows.

Let’s just say that a global pandemic, sinking interest rates, treasury yields (that for the first time in history temporarily pushed the entire curve below 1%), and for good measure an oil price war is not the best recipe for numerous or lucrative MSR trades.

While normally this is the section where I’d discuss trade color, due to the current state of the market transactions have been very few and far in-between. Not counting a handful of trades that got executed prior to the rapid decline in rates, unlike normal, there have only been few direct trades take place in the last month.

Given the low volume of bulk trades, I’ll reserve this section for another topic that firms should be thinking about right now. There are a lot of low note rate and soon-to-be very attractive MSRs being originated right now. Just like firms are widening primary/secondary spreads to manage for volume, co-issue buyers are doing the same. Most are not adjusting their SRP or Co-Issue grids, rather they are lowering their par rate to as low as 2.50% for Conventional 30 MSRs. Sellers can choose to sell for pennies on the dollar or they can choose to retain the MSRs and potentially sell for a higher price once markets recover. MIAC’s nGSAs (New Generic Servicing Assets) are essentially a Best Execution tool. Should I retain or sell my servicing? For anyone that retains servicing, they can trust that MIAC relies on the same model, the same assumption criteria, and the same par rate benchmark methodology whether we are producing our nGSAs or valuing your MSR portfolio. For those that are able, retaining MSRs should be a consideration.

An originator could create a 3.0 coupon or a 2.5 coupon. They would be selling the 50 bps from 2.5 to 3.0 for an implied multiple of 0.34375. They take their 3.625 Note Rate mortgage deliver into the 2.5 coupon and retain as much MSR as possible. The TBA implied multiples are also reflected in Cash Pricing and Investor Pricing. Because all these constituent’s layoff their position/risk in the TBA market.

Does one sell this 50 bps for a 0.34375 or find an alternative way to sell this 50-bps strip? Retention is one option. Consider this and the fact that co-issue pricing is being negatively impacted by anywhere from 15 to 25 basis points when strategically deciding whether to retain in this volatile market. 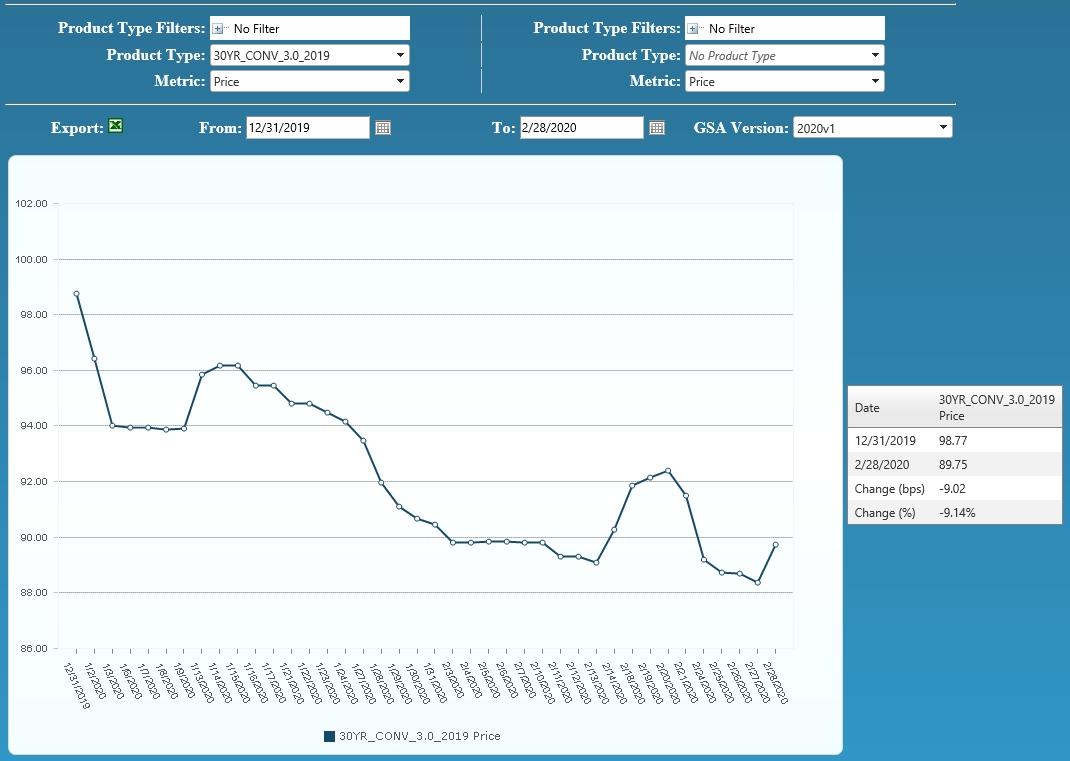