In larger GSA cohorts, which are actively traded in the MSR market, the Conv30_3.5_2016 and GNII_FHA30_3.5_2016 cohorts respectively decreased by 2.35% and 1.98%. During the month of May, Conv_30 Index OAS’s took a brief detour and widened slightly to close the month at 638.1 bps for an increase of 3.4 bps. Likewise, GNII_FHA_30 Index OAS’s widened to 756.2 bps for a month-over-month increase of 18.1 bps. Not to be discouraged with the increase and as reflected in a flurry of recent brokerage activity for negatively durated MSRs, year-to-date Conv_30 Index OAS’s are still tighter by a full 157.9 bps and GNII_FHA_30 Index OAS’s are tighter by an impressive 237.8 bps.

According to the June 15, 2018 MBA Mortgage Finance Forecast, the 30-Year Fixed Rate Mortgage Rate is still projected to end the year at 4.90%. This reflects an additional rise in mortgage rates of 54 basis points. After closing the month of May a full six (6) basis points lower, primary rates as reported by Bankrate® are already eight (8) basis points higher during the first 25 days of June. At the time of print, this month’s back-up means that year-to-date 30-Yr conventional primary rates are now higher by a full fifty-nine (59) basis points.

As reported last month, realized monthly CPR’s on conventional 3.5% agency coupons have been prepaying in the 8% to 9% range since January 2018. If mortgage rates continue to climb, where should we expect the new CPR floors for Out-of-the-Money Coupons to be realized? In years prior, the realized CPR’s adhered to a floor that was around 6%. In today’s environment, underwriting standards are loosening and cash out refinance activity is now accounting for a 3% to 4% CPR. In this easier underwriting environment, MIAC sees an 8% floor as a realistic expectation. As rates trend higher, further rate increases will have an increasingly smaller impact on the prices of the large population of OTM MSR assets.

When primary rates rise and CPR’s begin to level, servicers increasingly rely on earnings rates as a source for future upside in MSR value. In equivalent fashion with primary mortgage rates, from end-of-month April to end-of-month May, the 5-Yr swap rate, which is a common MSR market benchmark for earnings rates, decreased by approximately ten (10) basis points to end the month at 2.80%. Also in parallel fashion with primary mortgage rates, quarter-to-date and year-to-date the 5-Yr swap rate respectively ended the period four (4) basis points and fifty-five (55) basis points higher.
As anticipated, The Federal Open Market Committee raised the fed funds rate a quarter point to 2.0 percent on June 13, 2018. The Federal Reserve further signaled it will raise rates to 2.5 percent in 2018, 3.0 percent in 2019, and 3.5 percent in 2020. This was the seventh rate increase since December 2015 when the Fed first began raising interest rates from almost zero.

According to the MBA’s Quarterly Mortgage Bankers Performance report, independent mortgage banks reported a net loss of $118 per loan for assets originated in the first quarter of 2018. With rising per unit production expenses and reduced origination volume, Q1’18 ended up being the first quarterly loss since Q1’14, when mortgage originators struggled to cope with the compliance cost born out of the recently passed Dodd-Frank reform. For mortgage banker’s fortunate enough to own MSRs, they are able to experience the benefits of the natural hedge due to rising MSR values. Many mortgage bankers carry the MSRs under Lower of Cost or Market (LOCOM), so many have unrecognized and unrealized gains in their MSR portfolios. So what does this mean for MSR transaction activity?

Bulk transfers between January and May of this year totaled $181 billion. The three largest components of the $181 billion in year-to-date bulk transfers were Fannie Mae, Freddie Mac, and Ginnie Mae at $70, $57, and $42 billion respectively. Until May, numerous buyers competed for a fewer than ideal number of offerings which meant execution levels soared. With 10 or more offerings in the market at any given time, sellers run the risk that buyers may become choosier about the offerings they target, and/or that buyers may experience bandwidth constraints that could limit the number of active bidders for any given offering. To date, the increased supply has met with an even larger increase in demand.

In consideration of recent transactions only, we’ll define “large” offerings as deals containing $1 to $5 plus billion in unpaid principal balance. Execution levels for attractive collateral continue to hover in the mid to high 4 multiple range with a smattering of 5 multiple and higher transactions. Smaller offerings, defined as $500 million to $1 billion, can trade at a discount to larger offerings but are increasingly becoming the target of some larger buyers who have decided they’d rather not compete at the levels currently being offered for some of the largest agency offerings. With a handful of “large offerings” bidding at yields as low as 6%, select buyers are looking at both smaller agency offerings and increasingly Ginnie Mae offerings as a flight to margin. The good news is that larger buyers have a tendency to share their preferential economies of scale with the sellers and as such, even some of the smaller $500 million to $1 billion dollar deals are trading at, or near, a 4.5 multiple. May and June offerings executing at these levels contained a blend of agency product emanating from mostly well-capitalized sellers many of whom had national footprints and MSR’s that had weighted average note rates that were as much as 50 to 75 basis points lower than prevailing primary mortgage market rates.

Smaller conventional packages categorized as $300 million or less in unpaid principal balance are trading at a robust pace too but at prices that “on average” range anywhere from 10 to 20 basis points lower than the bid prices obtained on larger offerings.

Minus some observed outliers that fetched levels at or near a 4 multiple, trading levels on mostly newer “at-market Ginnie Mae offerings” continue to lag conventional agency transactions and still range in the mid to low 3 multiple range. If the trend toward lower Ginnie Mae prepayments continues, we may witness increased buyer interest from those seeking improved margins. As with all transactions Ginnie Mae execution levels are heavily influenced by service fee level, geography, deal size, delinquency rates, borrower credit quality, counterparty strength, and last but not least, Mother Nature.

The Role of Non-Banks

In 2015 non-bank servicers held over 30% of the outstanding unpaid principal balance being serviced. Furthermore, as larger banks increasingly re-enter the servicing market, non-banks who desire further growth of their owned servicing for others, have been forced to increase their bidding levels in an effort to remain competitive. The mortgage market has changed dramatically since the crisis and this is especially true for non-banks. While regulation has dramatically altered the landscape and ultimately the ability of the larger banks to withstand adverse economic shocks as most banks have easy access to liquidity, arguably it could be said that a number of non-banks still lack the ability to withstand the liquidity stress caused by a severe economic downturn. The mortgage market is commonly affected by four macroeconomic parameters, interest rates, unemployment, GDP, and home prices. These four macroeconomic parameters are far-reaching. And while banks and non-banks alike are prone to a certain amount of strain, the growing concern is that reduced margins coupled with growing portfolios could put additional pressure on the non-banks of whom are less equipped from a liquidity perspective to handle the downturn in economic conditions.

One of the differences between the pre and post-crisis mortgage market is the size of the Ginnie Mae market and who owns the majority of those servicing rights. The Ginnie Mae market has grown significantly since 2007 and is now predominantly held by non-banks. During the financial crisis, Ginnie Mae servicing was largely concentrated at the banks. The most worrisome aspect about the shift in Ginnie Mae MSR ownership is the continued ability of non-banks to make the advances during times of worsening economic strain. Servicers are generally able to forecast how much cash they will need on hand in order to meet their advancing obligations, but this would not be the case if there were to be a sudden shock to the economy. Servicing advance obligations can be more difficult to meet in the event of an economic downturn, especially in the event of falling home prices and increasing unemployment. In the most extreme situation, presuming delinquencies rise and servicing advance obligations increase, the growing concern is that non-banks may not have enough cash to finance these obligations and would, therefore, seek additional financing. The problem is that during economic downturns credit availability tightens and could make it difficult and in some cases impossible for some non-bank GSE and GNMA servicers to secure needed financing.

Factors relating to the GSEs and Ginnie Mae can also make it more difficult for non-banks to secure financing for their advance obligations. Their ability to sell, terminate, or transfer the servicing in the event of servicer underperformance can make creditors reluctant to provide financing for servicing advances due to skepticism of whether or not the loans are actually collateralized. While generally resolved with an acknowledgment agreement, in the unlikely event that Ginnie Mae was to forcefully transfer the servicing, the new holder of the servicing would receive the proceeds from the advances, even though they did not make the initial disbursement. As a result, creditors may be less willing to make secured loans to cover the advances for Ginnie Mae serving. This can result in non-banks having to accept an increased cost of capital associated with unsecured debt, or otherwise default on their servicing obligations.

Increasing interest rates can adversely affect the origination side of any business model. This was observed in the 1st Quarter of 2018 with the recent and aforementioned 1st quarter origination losses for independent mortgage banks and mortgage subsidiaries of chartered banks. Refinancing took center stage in the non-bank origination side of the business with Inside Mortgage Finance recently reporting that refinance activity accounted for as much as 70% of some of the largest non-banks 2017 originations. The MBA believes refinancing will be down by around 24% from 2017 levels, which is causing many to lean harder on their servicing businesses rather than reliance on their origination revenue. This reliance could exacerbate the issue as the non-banks fight to increase their holdings of servicing rights. MSRs account for up to 20% of the assets of some of the largest non-banks’ balance sheets according to SEC filings for 2017, and as this percentage increases so will the liabilities associated with this inherently volatile asset.

Post-crisis regulation has been largely concentrated on the large banks and the notion of too big to fail while non-bank regulation has been largely overlooked. Due to increased regulation banks have shifted a large portion of the liability in the mortgage market to the non-banks. The capital requirements for non-banks as compared to their bank counterparts are extremely low, with most non-banks maintaining cash reserves equal to 6% or less of assets. The non-banks have filled a crucial void in the market over the past five years but have also taken on more responsibility and higher secured debt to tangible asset ratios in the process. In order to protect consumers, taxpayers, and all non-bank stakeholders the growing sentiment is that regulatory, capital, and liquidity standards for non-banks should reflect this additional responsibility. 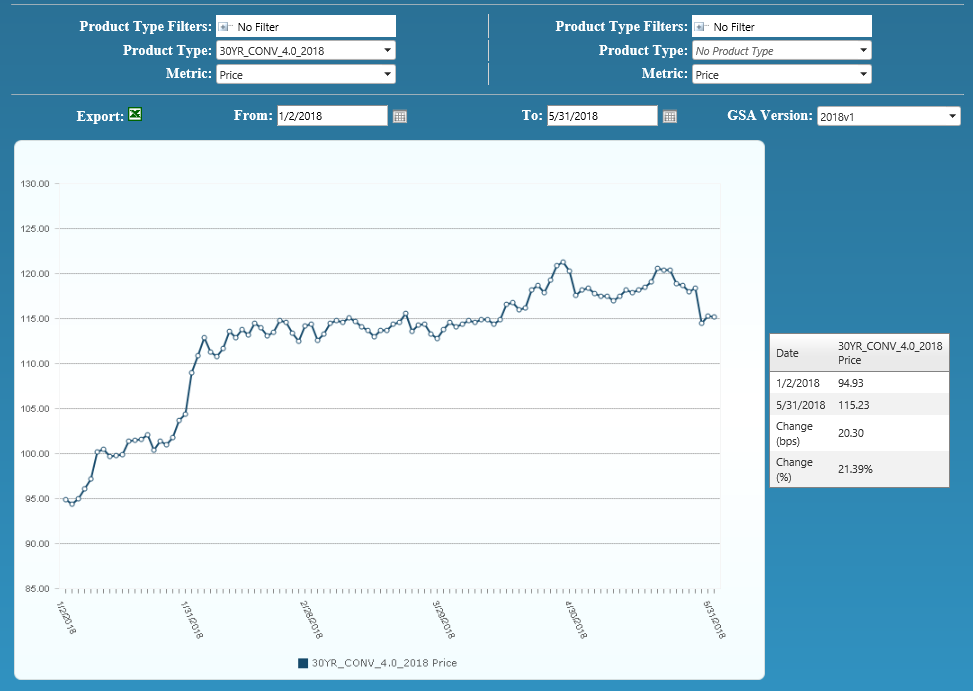