This past week was full of inconsistent data releases as 10-Yr yields bounced around before finishing better at 2.654.

The Fed minutes showed that they are still committed to staying “patient” and conversations are starting to swirl around the 2% inflationary target set in 2012. Existing Home Sales fell for the third straight month in a row and were the lowest since November 2015. Trade negotiations continue between the U.S and China appear to be going in the right direction leading President Trump to extend the March 1st deadline. The week ahead is full of data, Treasury auctions, and Fed Chair Powell will be testifying on Capitol Hill Tuesday and Wednesday. 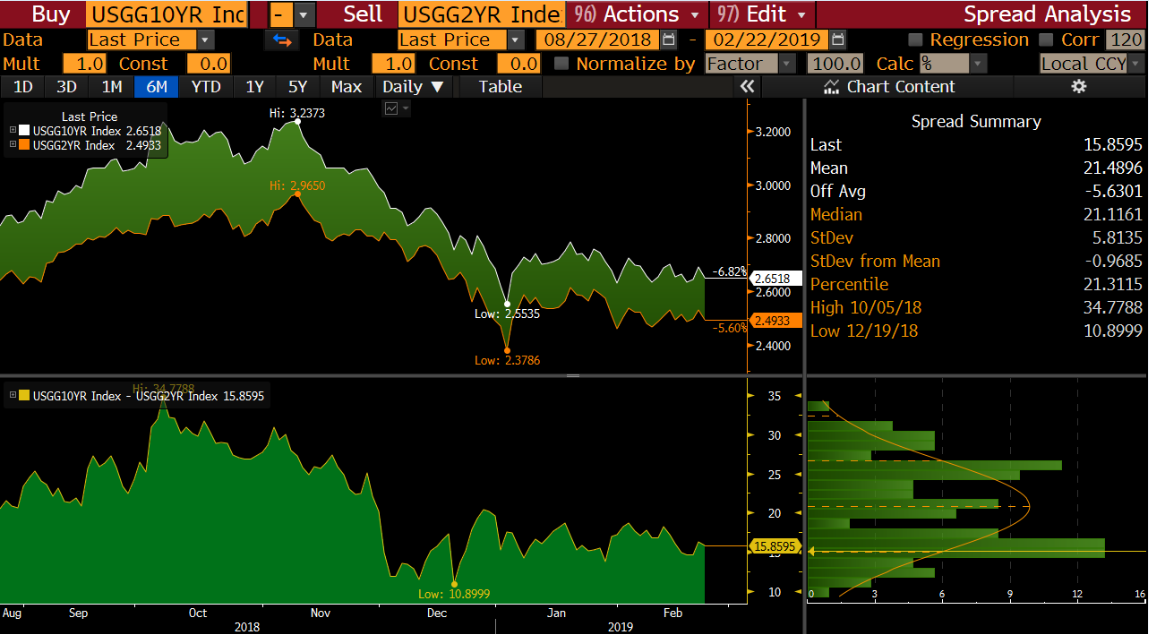 The most recent FOMC minutes were released Wednesday and showed that the Fed is still committed to taking a “patient” approach to further rate increases. The Fed feels there is little risk to leaving the Fed rate unchanged for now, but further rate hikes would be appropriate if the economy evolves strongly over the next year. It was agreed there should be flexibility regarding balance sheet normalization and thought it would be best to announce a plan later this year to stop reducing asset holdings. Officials agreed, “such an announcement would provide more certainty about the process for completing the normalization of the size of the Federal Reserve’s balance sheet.”. The Fed cited, “softness in core and total inflation” as the reason for the patient approach.

The Feds inflationary target has been 2% since 2012 but with short-term rates not looking like they are going much higher the Fed may need to relax that position. If a recession were to happen soon the Fed wouldn’t have as high of a benchmark to use as they have in the past three downturns. In each of three previous downturns, the Fed has reduced the Fed rate by roughly 5%. Regarding this topic, Boston Fed President Eric Rosengren said, “It’s a good discussion—to think about how we have policy space, particularly if interest rates through this cycle are not going to be much higher than they already are.”. These types of discussions are still in the very early stages but is something to be closely watched if inflation stays at the current level. 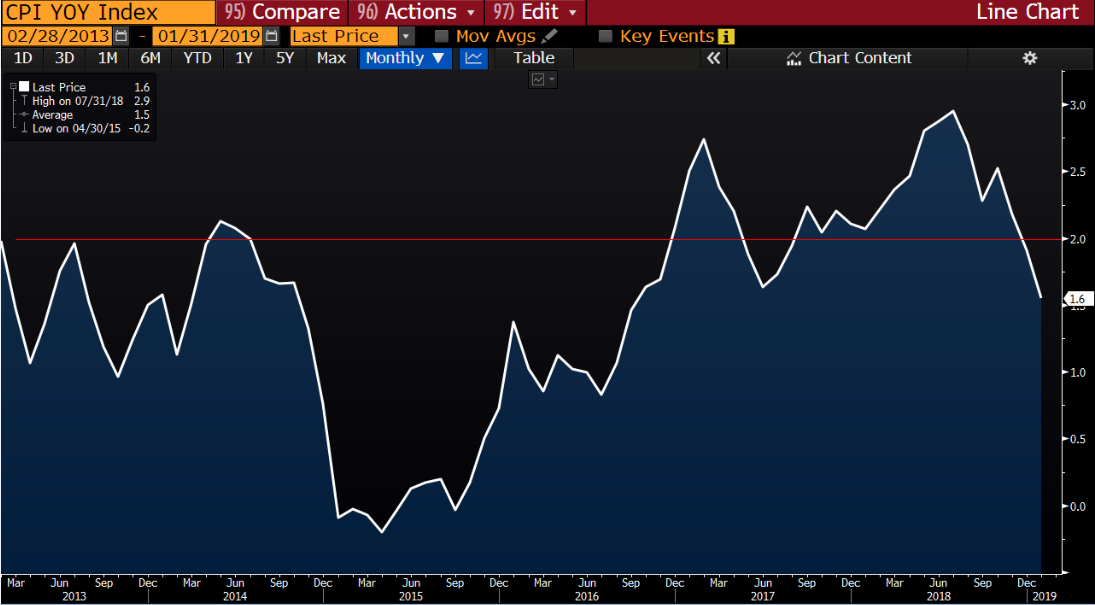 Figure 2: CPI is one of the key measures the Fed uses to gauge inflation   Source:  Bloomberg

Existing Home Sales for January fell -1.2% (better than the -6.4% in December). Sales came in at 4.94 million, well below economists’ expectations for an increase of 5.02 million. Last month’s home sales were the lowest since November 2015 and the third straight month of declines. Last month the national median sale price for a previously owned home was $247,500. While this is a 2.8% rise over the previous year it is also the slowest year-over-year increase since February 2012. As for interest rates, they rose for most of 2018 but started to come back toward the end of the year. According to Freddie Mac, the average 30-Yr fixed mortgage rate is 4.35%, down from 4.94% in Mid-November. The National Association of Home Builders said on Tuesday that builder confidence for new single-family homes was up to 62 in February from 58 in January. 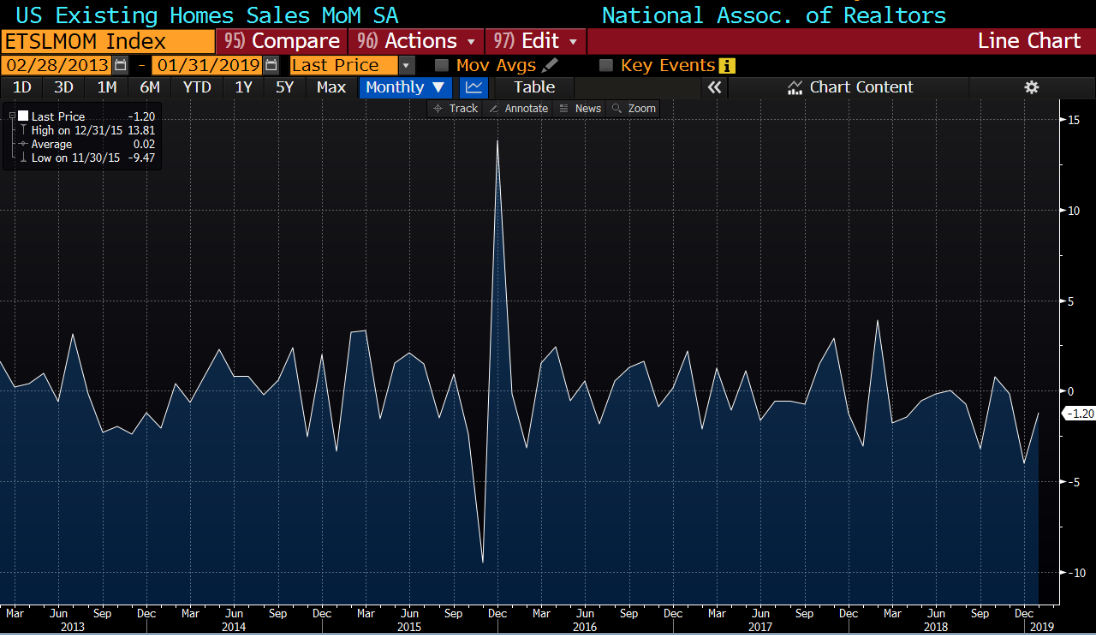 Chinese and U.S. trade negotiators met four days this past week and there have been a lot of positive headlines as the President is still considering extending the current deadline to raise tariffs. An extension would prevent 10% tariffs on $200 billion from jumping to 25% come March 1st. President Trump said, “We’re having good talks, and there’s a chance that something very exciting can happen.”. While the current signs of progress are encouraging the two sides remain divided on major issues such as Chinese government pressure on U.S. companies to transfer technology to Chinese partners; protection of intellectual property; and subsidies for Chinese state-owned firms. One other key area is currency. In the past, China has taken steps to devalue the yuan to give Chinese exporters an advantage in foreign markets. The potential for a trade deal between the U.S. and China has fueled stock rallies so it will be interesting to watch markets react as these key areas are addressed in the coming weeks.

Shortened trading weeks never disappoint when it comes to volatility. 10-Yr yields reached a low of 2.634 on Wednesday and a high of 2.695 on Thursday as trade headlines had markets in a tizzy. FN30 outperformed G230 last week across the multiple coupon stacks (3.00% – 4.50%) as the 2-10 spread widened to 15 and mortgage rates improved for the third straight week in a row. On Friday, lower coupons were tighter by 1 to 1+ ticks vs. 10-Yr Treasuries while higher coupons were roughly a + wider on the day. The primary/secondary spread ended the week slightly tighter at 93.73.

It wouldn’t be at all surprising to see Treasury markets down come Monday morning and stocks rally based on recent trade optimism. The front-end supply from Treasury auctions at the beginning of the week should be interesting to watch with $41B in 5-Yr’s and $32B in 7-Yr’s. 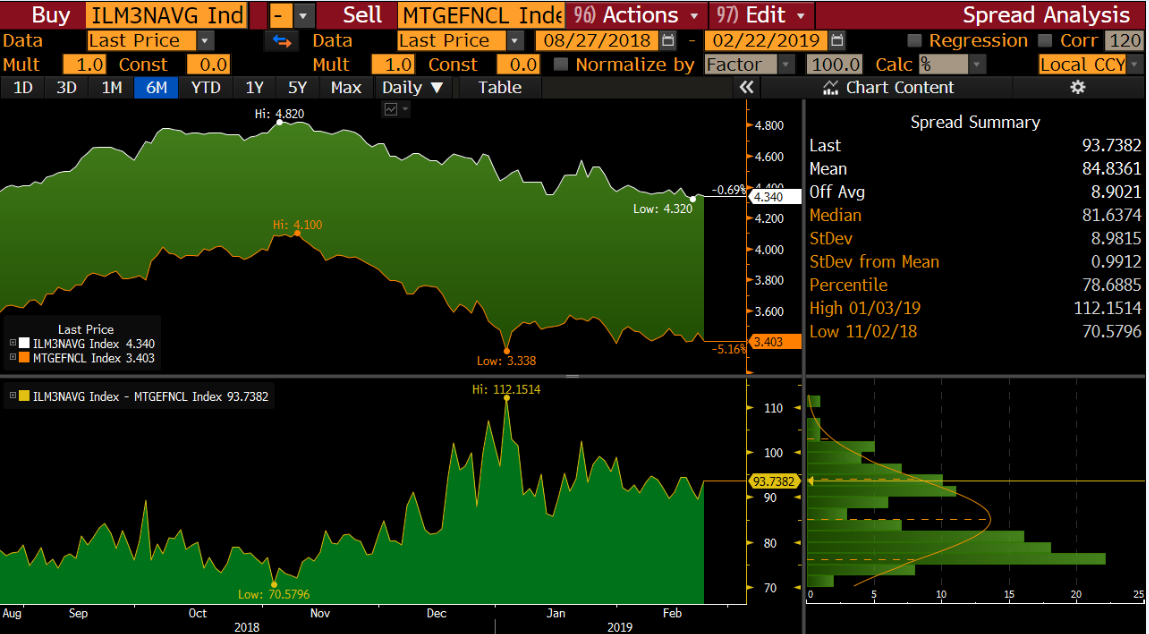 Trading volume was down significantly week over week, but that is to be expected with a holiday-shortened week. 15y and GNMA 30yr front-month settlement dates are behind us as well so the increased activity from last week’s rolls and pooling has subsided, contributing further to the decline in trade volume this week. 30yr MBS remain well distributed across the 3.5 to 4.5 coupon range with the concentration in 4s starting to stick out further above the canopy. The highest concentration of 15yr securities remained in the 3 and 3.5 coupons with the percentage of 3s traded pulling closer in line with the 3.5s. 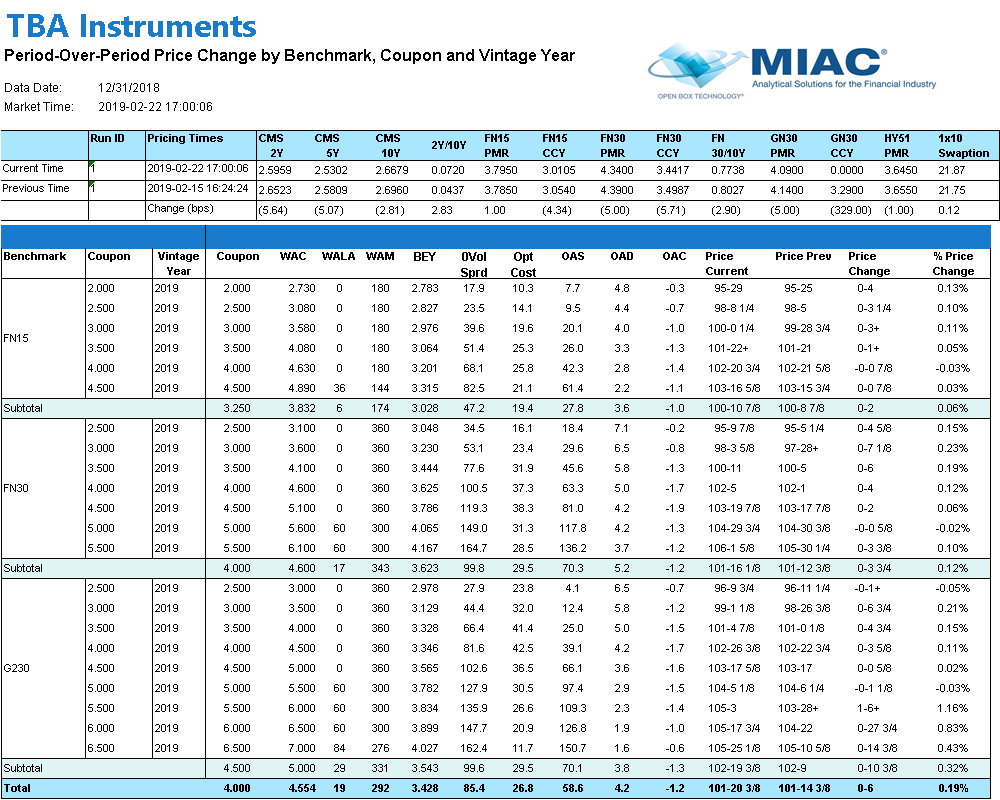 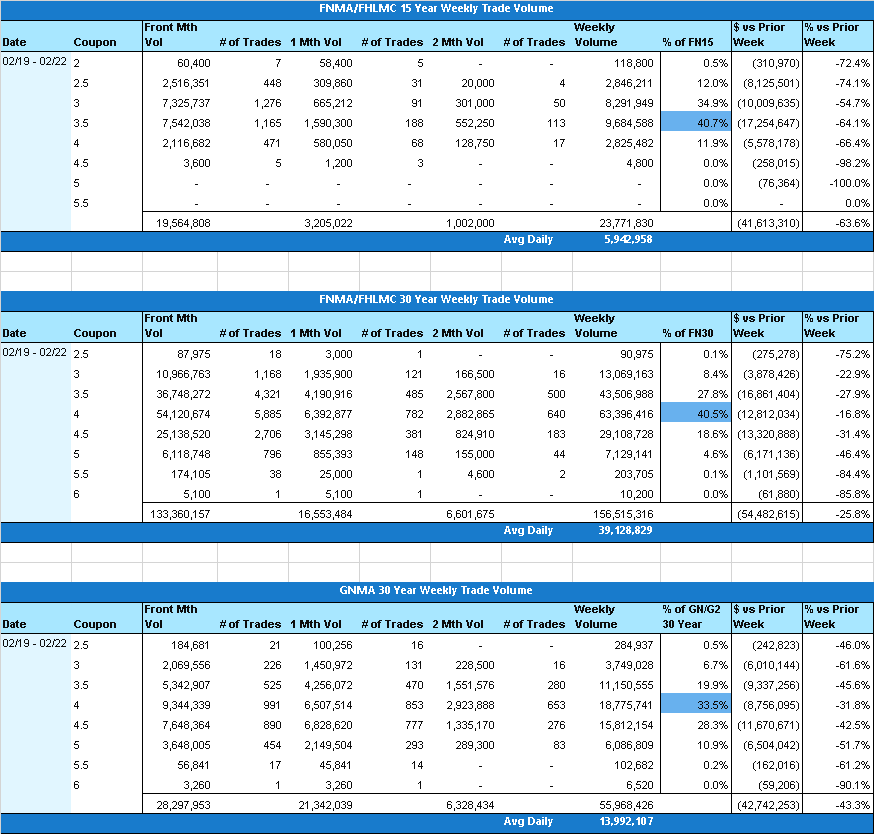 The week ahead brings Treasury auctions, a slew of data, and Fed Chair Powell’s testimony on Capitol Hill. Aside from data the market will be watching trade talks between the U.S and China, the meeting between President Trump and Kim Jong Un, and Michael Cohen’s testimony before the House Oversight Committee. 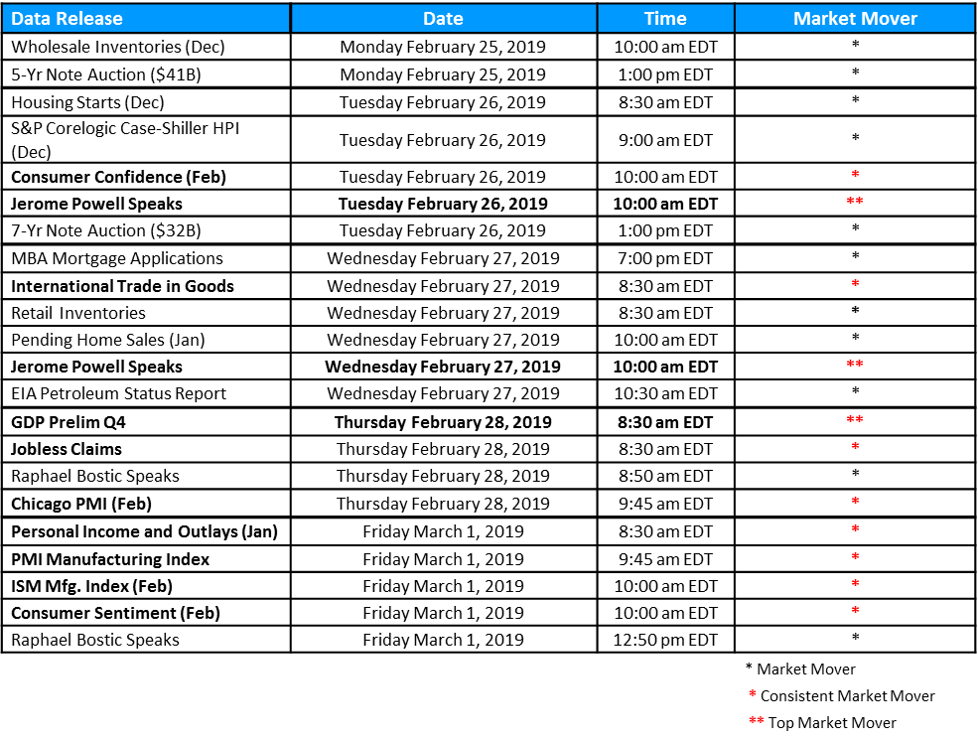