10-Yr Treasury yields rallied 12 bps finishing the week lower at 2.63 and the 2-10 spread finished flatter at 16. We are watching 2.75 as a support level and 2.63 as resistance for the 10-Yr. Mortgages finished tighter vs. hedge ratios on Friday where lower 30-Yr coupons were 2.5 to 3 ticks tighter. FNMA pricing continues to outperform GNMA pricing in the 3.00% – 4.500% coupons. The additional supply from auctions Monday through Wednesday should be closely watched. Any interest or lack thereof has the ability to move markets. 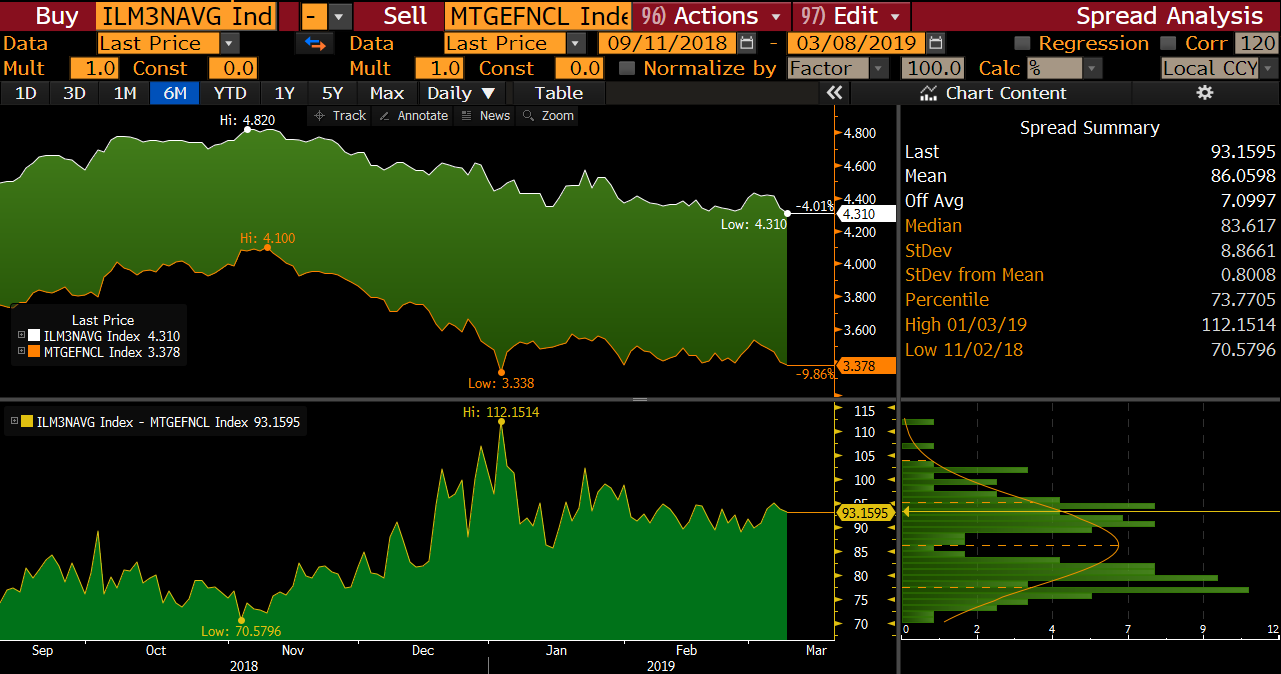 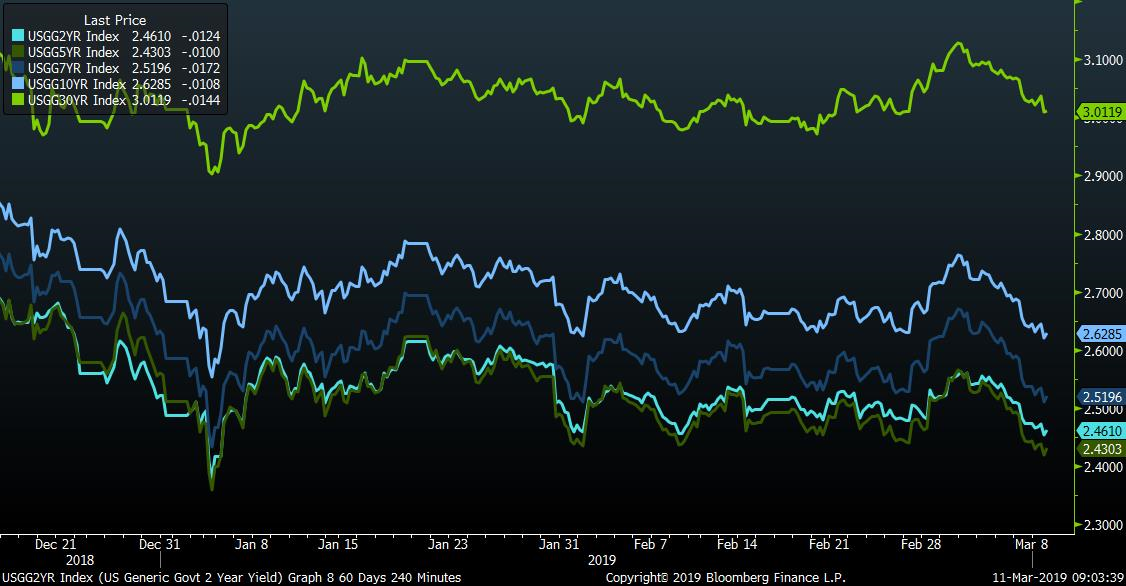 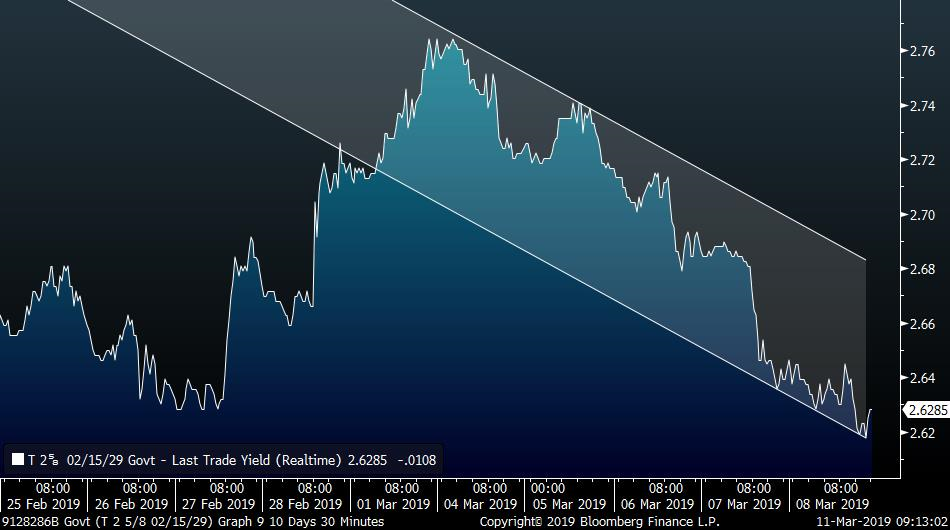 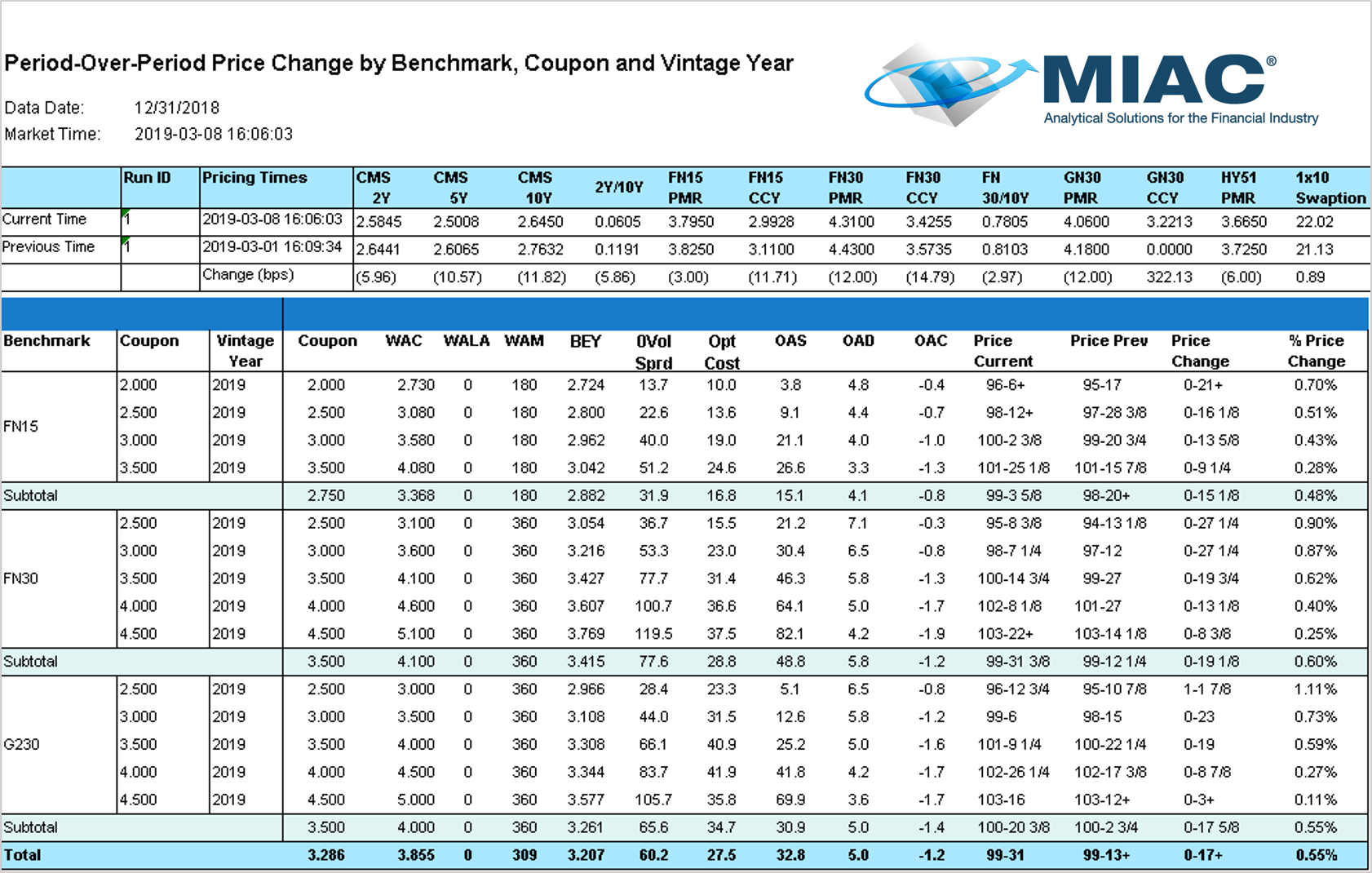 Trading volume was up significantly week over week. The increased activity was primarily in the FN/FG 30yr securities as traders were cleaning up positions ahead of class A settlement this week. Coupon concentration was consistent week over week. 15yr volume remains heavily weighted in the 3s and 3.5s. 30yr volume is still concentrated in the 3.5s, 4s, and 4.5s. 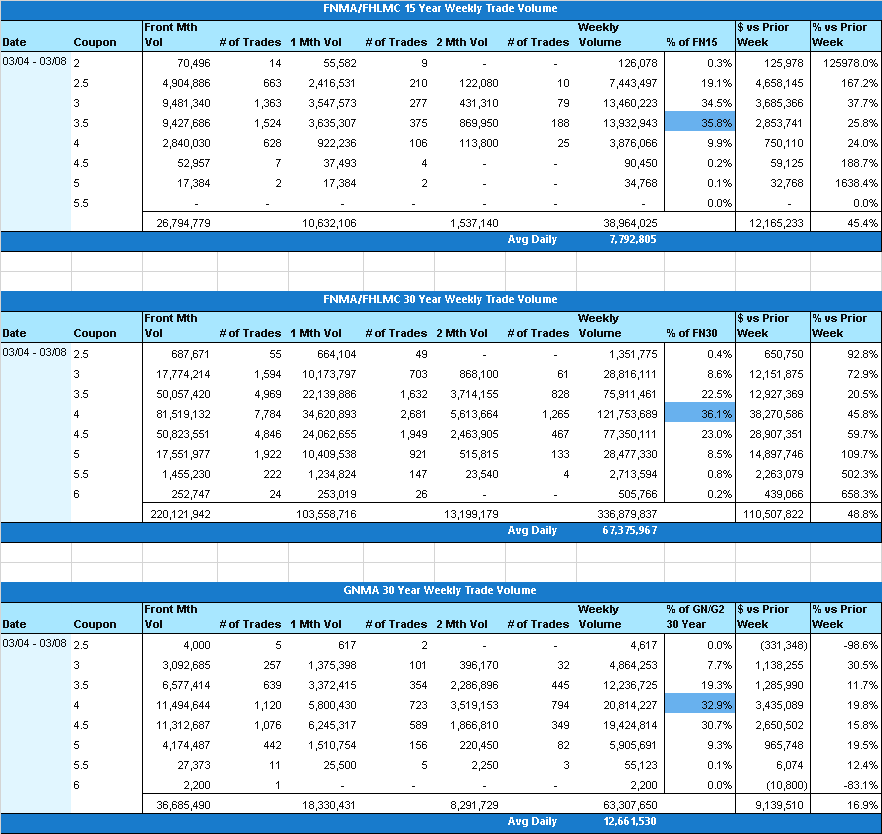 10-Yr Treasury yields finished last week lower as the 2-10 spread flattened in the wake of mixed employment releases. Markets rallied Thursday on the back of aggressive actions taken by the ECB to reduce the risk of a recession in the near-future. Also on Thursday, the Securities Industry and Financial Markets Association (SIFMA) voted to support a single mortgage-backed bond for Fannie Mae and Freddie Mac. Friday’s jobs report left people scratching their heads in disbelief. In the coming week, inflationary data will be released, giving possible justification to the Fed’s wait-and-see policy. 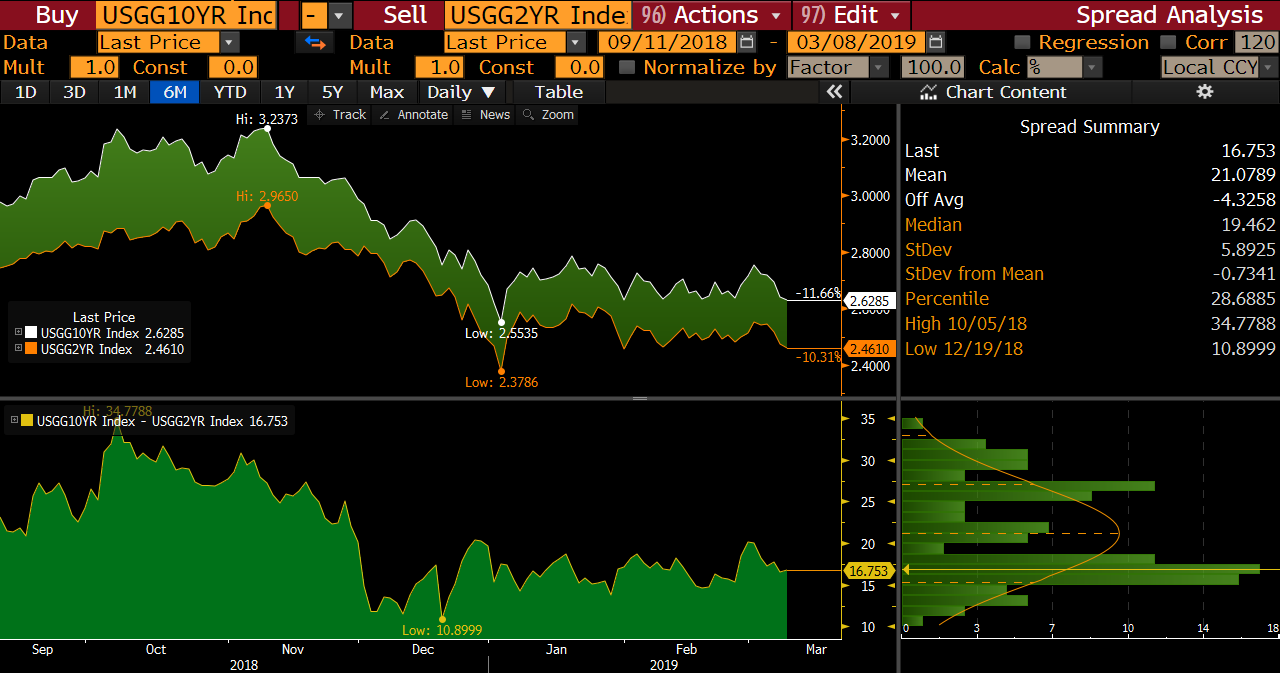 It’s no surprise that the biggest shock last week was the jobs data released on Friday. When the numbers were first released, there was a general feeling of maybe there is a 1 or 0 missing. Few expected the numbers to be off as much as they were and jobs growth in February grossly disappointed with Non-Farm Payrolls coming in at +20k. Well below expectations of +180k and the lowest since September 2017. The slowed growth might be due to the strong growth we have seen in previous months with January being revised upwards from 304 to 311. Regardless of how low the most recent print came in, the 3-month average sits at +186k, near the average for much of the expansion. Unemployment dropped to back down to 3.8% (last seen October 2018) and wages grew at the fastest pace in nearly a decade. These most recent results reinforcement the Fed’s patient approach to any near-term rate changes.

On Thursday the ECB announced rates will remain lower longer than expected based on lower growth and inflation expectations. Real gross domestic product growth was slashed to 1.1% from 1.7% this year and consumer-price inflation to 1.2% from 1.6%. A new round of TLTRO’s (targeted long-term refinancing operations) was announced for banks as Mario Draghi said the odds of a recession are “very low” but remains reliant on economic data. Draghi went on to say, “the weakening in economic data points to a sizable moderation in the pace of the economic expansion that will extend into the current year”. An extension of the TLTRO program is expected to help stimulate lending and growth in the eurozone by allowing banks to borrow at rates lower than those in the bond market. This program will remain in place until 2023.

A proposed new single mortgage-backed security moved past the final hurdle Thursday as SIFMA voted to support its’ launch in June. The GSE’s will begin issuing Uniform Mortgage-Backed Securities (UMBS) on June 3, 2019, to finance fixed-rate mortgage loans backed by one to four-unit single-family properties. The new single security will merge two products currently issued by Fannie and Freddie. Many believe that this could eventually set the stage for an overhaul of the housing-finance system creating competition by allowing new players to issue bonds on the single-security platform. A reduction in borrowers’ costs is also expected since the combined market will be much larger and more liquid then what is currently in place.

This week brings inflationary data as February CPI will be released on Tuesday with expectations of +2.2%. If CPI data is near expectations the Fed’s new patient approach could be pushed aside and a rate increase could be back on the table for the first half of this year. If CPI prints below expectations, then this would just be another addition to the growing list of reasons for the wait-and-see approach. We will also be keeping a close eye on this week’s auctions and the interest they draw. 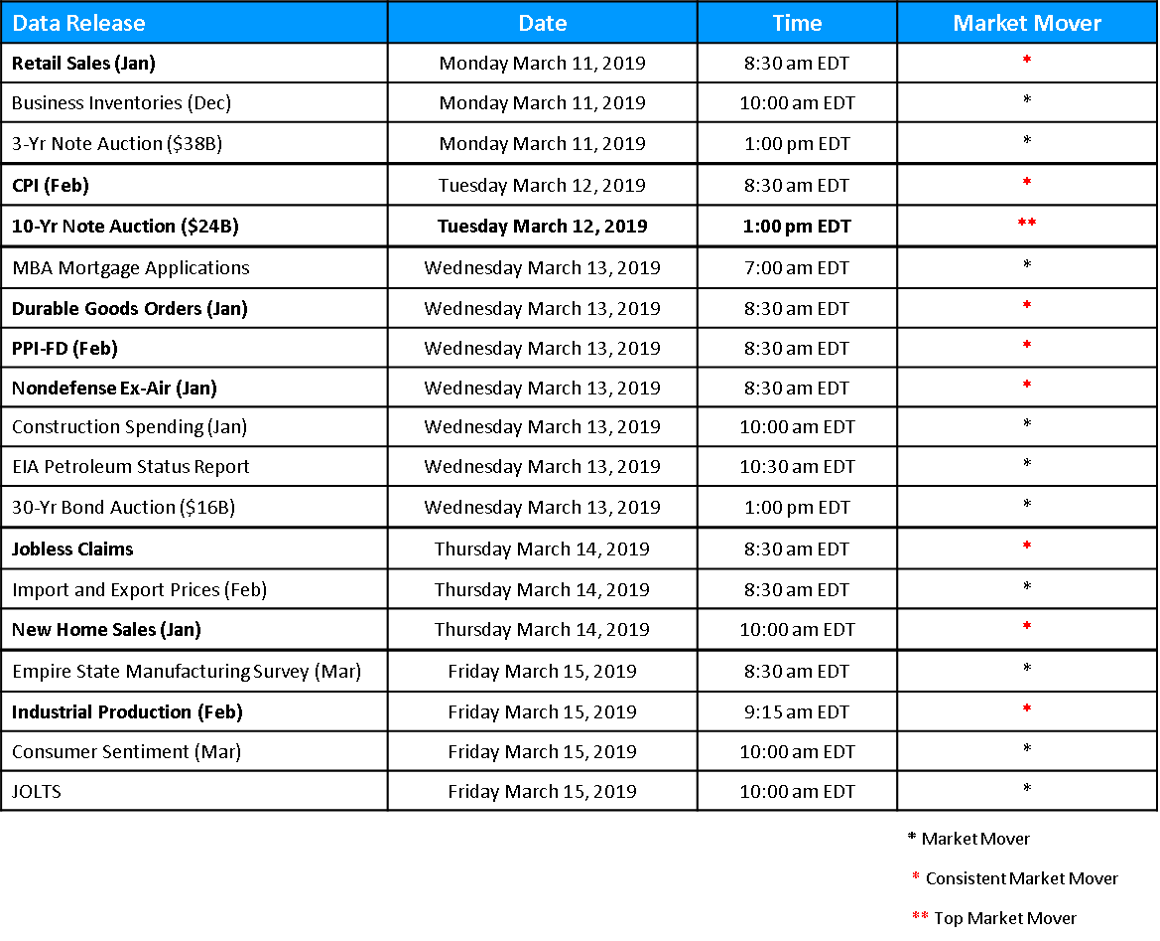