Curve flattening was in full effect last week as the 2-10 spread tightened to 12. The 10-Yr rallied 10 bps on Friday on the back poor European economic data finishing the week at 2.437. 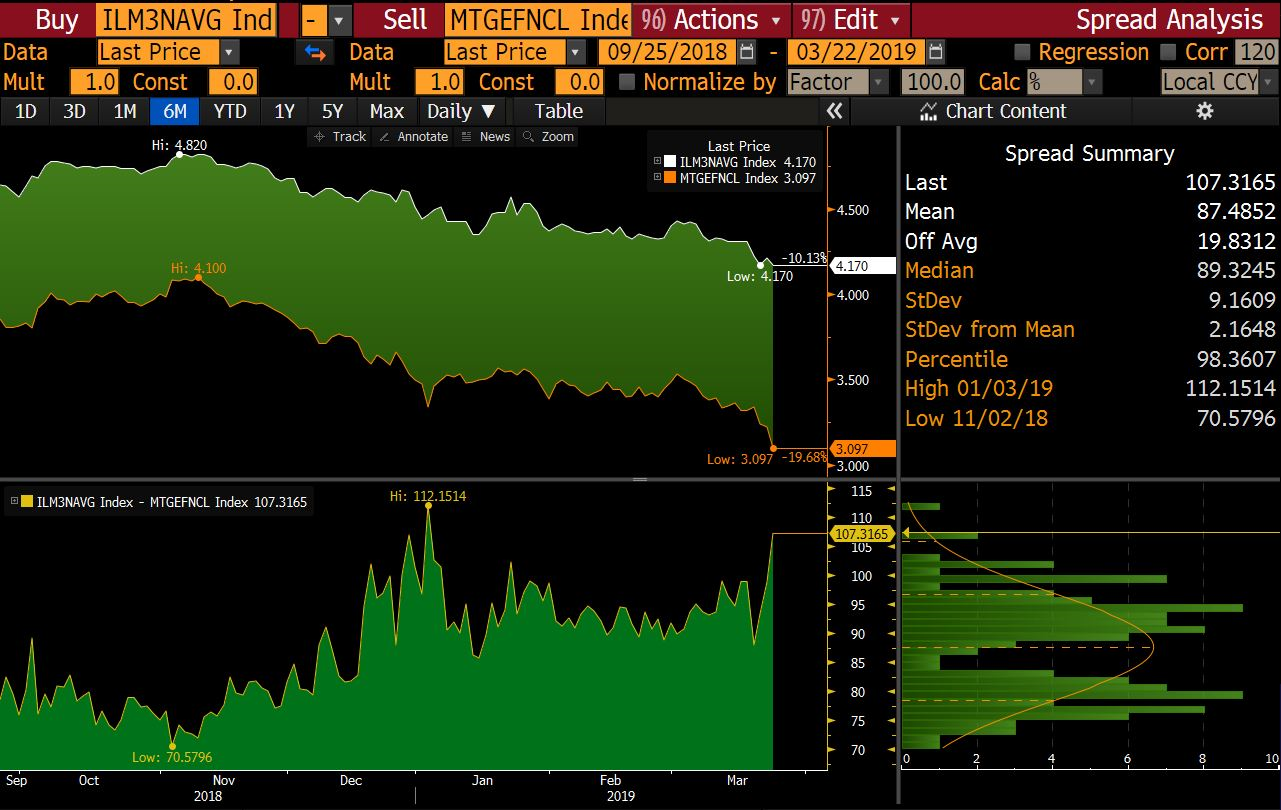 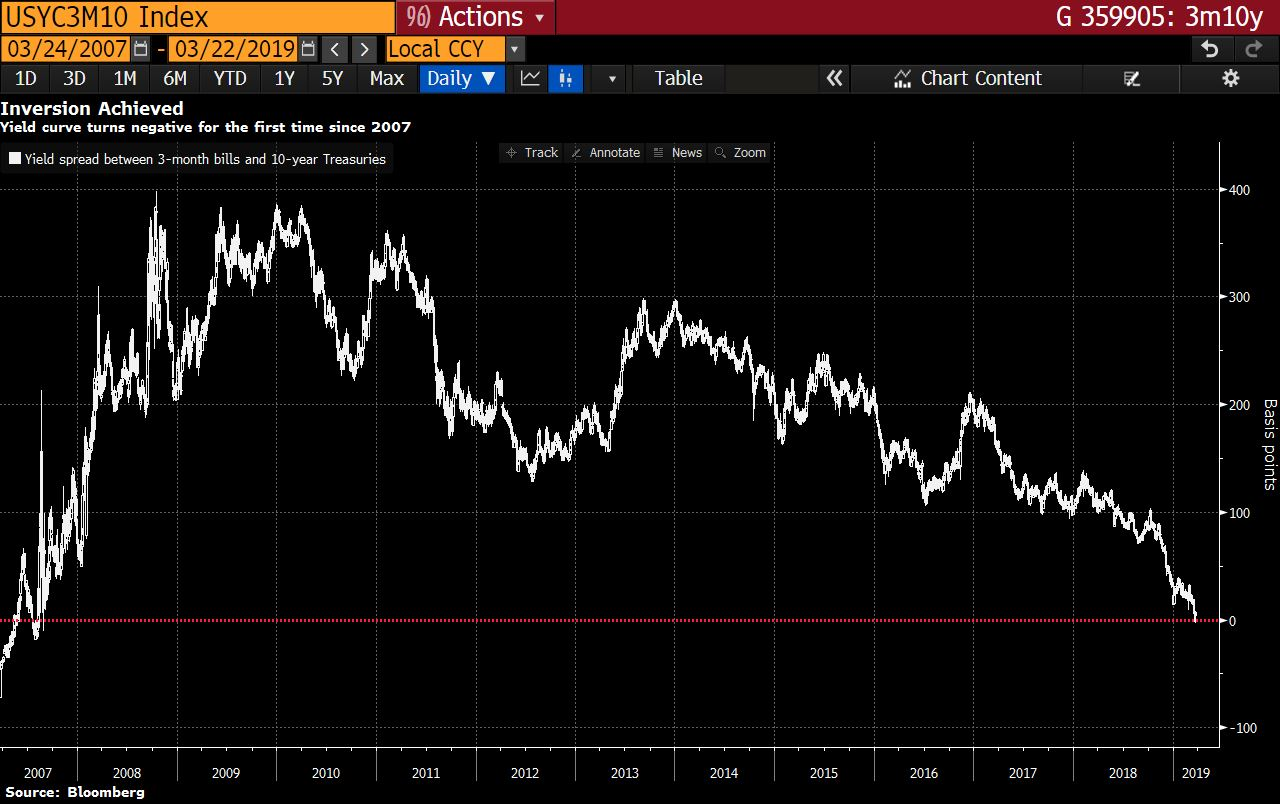 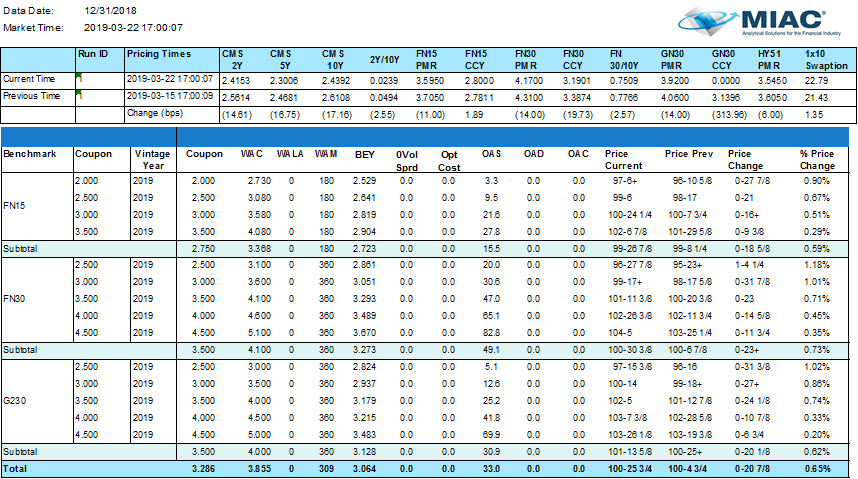 Trading volume was down slightly week over the week due to the decline in 15yr activity now that class B settlement is behind us. Conv 30yr trade volume was up about 10% and GN 30yr trade volume declined roughly 8%. Daily trade volumes increased as the week went on, driven by a steady decline in rates. Volume is higher again to start this week as rates posted a lower mark again. 30yr production has been heavily concentrated in the 3.5 – 4.5 coupons for months now. We don’t expect that to change, but we have seen the percentage of 3.5s increase as rates dropped last week. More of that to come if we hold these levels.

The Fed’s dovish tone continued as they left rates unchanged on Wednesday and announced that the winding down of the balance sheet will end in September. 2019 rate hike projections were lowered from two to none and the Fed only sees one hike in the next two years. They went on to cut the 2019 GDP estimate from 2.3% to 2.1% and lower in 2020 and 2021. During his post-announcement press conference, Powell gave reassurances that the economy is in a good place and that policy change doesn’t appear to be in the cards currently. Chairman Powell said, “It may be some time before the outlook for jobs and inflation calls clearly for a change in [interest rate] policy”.

The updated FOMC announcement is below. Bold indicates updated verbiage.

“Information received since the Federal Open Market Committee met in January indicates that the labor market remains strong, but that growth of economic activity has slowed from its solid rate in the fourth quarter. Payroll employment was little changed in February, but job gains have been solid, on average, in recent months, and the unemployment rate has remained low. Recent indicators point to slower growth of household spending and business fixed investment in the first quarter. On a 12-month basis, overall inflation has declined, largely as a result of lower energy prices; inflation for items other than food and energy remains near 2 percent. On balance, market-based measures of inflation compensation have remained low in recent months, and survey-based measures of longer-term inflation expectations are little changed.” 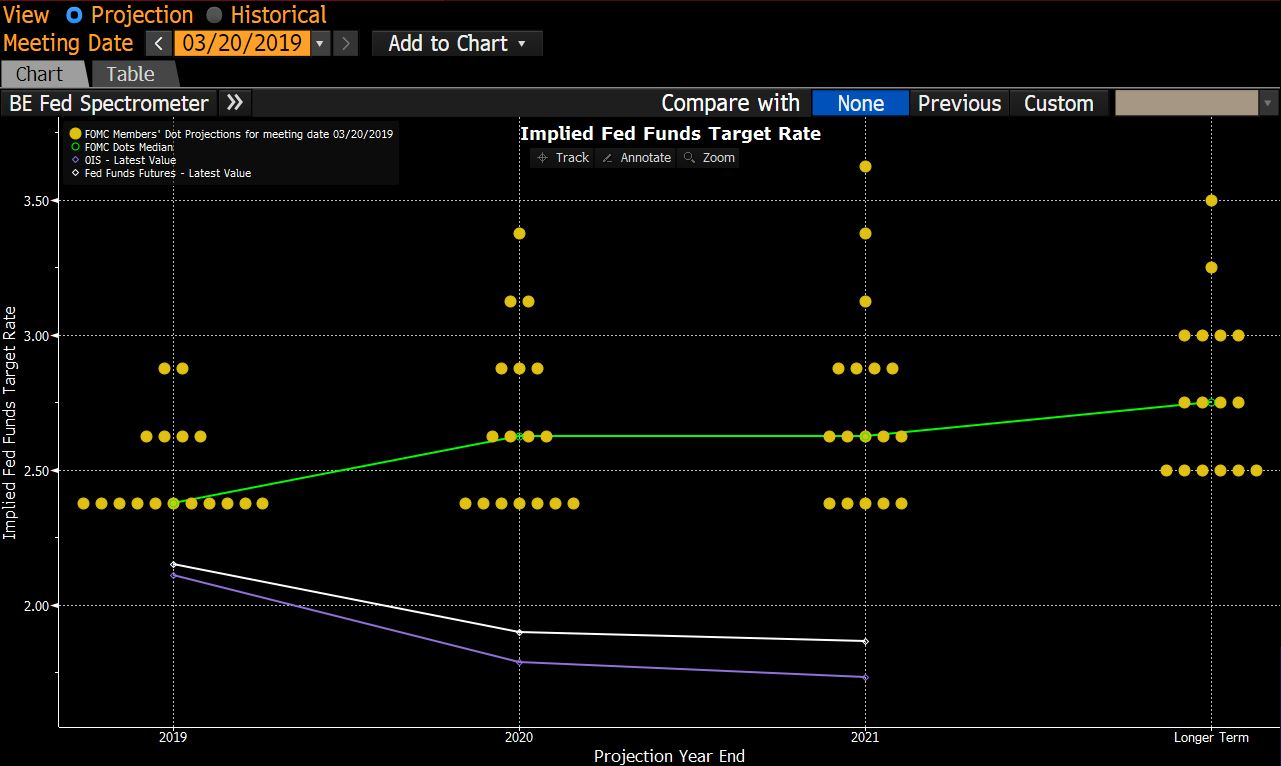 German 10-Yr yields fell below zero on Friday for the first time since 2016 as Manufacturing PMI came in at 44.7 vs. expectations of 48 (the weakest reading since 2012). France’s Manufacturing PMI came in at 49.8 vs. 51.5 and euro zone factory output in March fell at the fastest pace in nearly six years. Recent warnings from central banks regarding poor economic growth outlook has caused investors to turn to the safety of government bonds. Falling European bond prices pushed U.S. yields to their lowest levels in over a year. 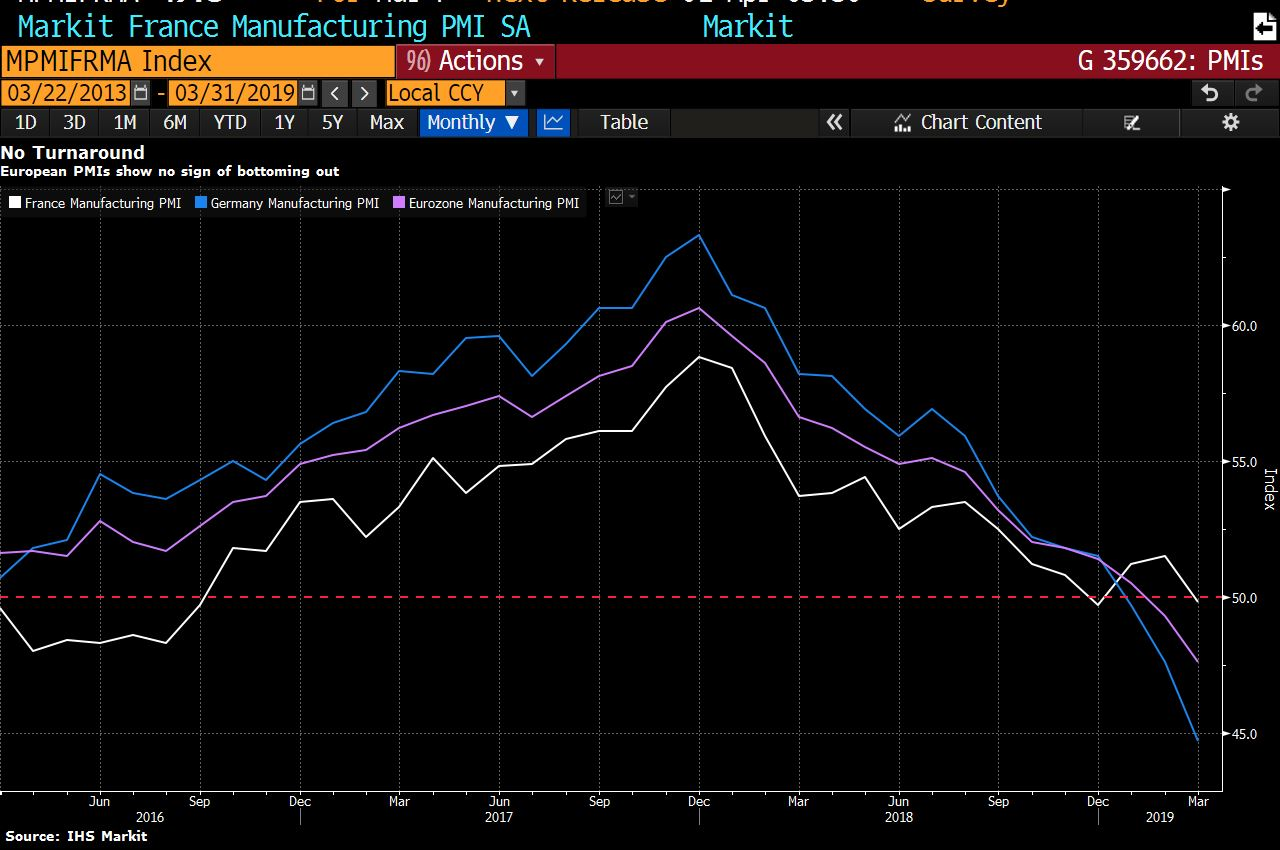 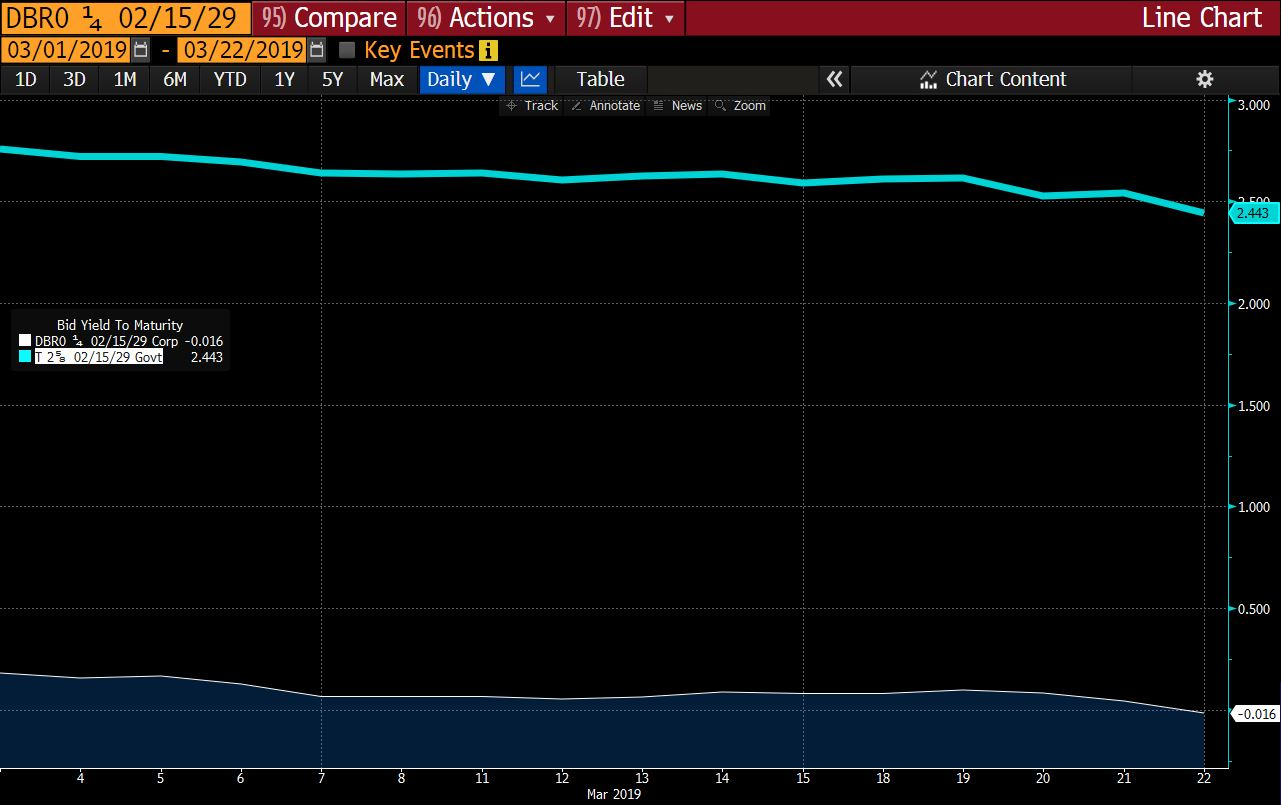 The U.K. was granted an extension last week moving their original March 29th deadline to leave the EU April 12. U.K. lawmakers voted March 14th to delay the U.K.’s exit from the EU by three months but the 27 EU leaders had a different timetable in mind and last Thursday is when they gave Britain another two weeks. If by some miracle the House of Commons approves the existing deal next week then EU leaders will delay the exit until May 22, giving the U.K. time to work out all the technical details. Prime Minister May’s inability to foster a deal that Parliament can agree to has caused massive waves in the U.K. and abroad adding to existing global economic concerns. On Monday evening, lawmakers will vote on a plan to hold “indicative” votes on economic ties to the EU that is said to create an outline of A Brexit deal the House of Commons may agree to pass next week.

Figure 10: Pound-dollar volatility on the back of a no-deal Brexit        Source: Bloomberg

This week brings key economic data for the U.S. and abroad. Weary investors will be watching for signs of a global slowdown with the release of fourth-quarter domestic product readings from the U.S., U.K., and France. Weak eurozone and U.S. manufacturing data caused bond markets to rally at the end of last week and yields could drop even lower if this week’s data continues to show a global slowdown. Other notable data releases include Consumer Confidence, Jobless Claims, Chicago PMI, and Consumer Sentiment. 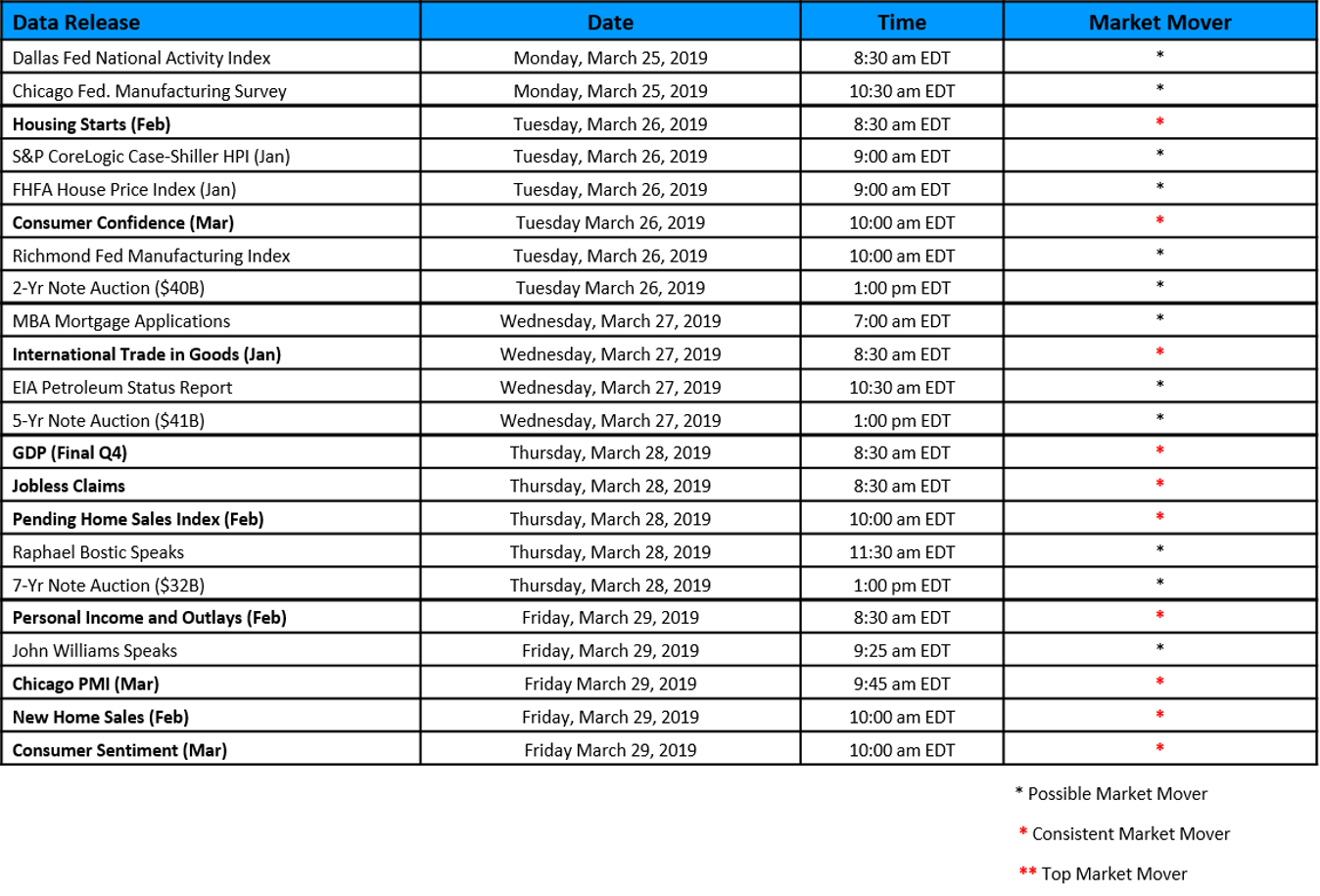