Conv 30yr trades were 5.3 times the amount of GNMA 30yr, an increase over the 4.2 multiple from the prior week. The 3.5 coupon had the most activity in the Conv 30yr stack, though the volume remains well balanced between the 3.5, 4.0, and 4.5 coupons. GNMA 30yr mirrored the Conv 30yr stack in concentration this week. Conv 15yr activity remains heaviest in the 3.5 and 4.0 coupons. 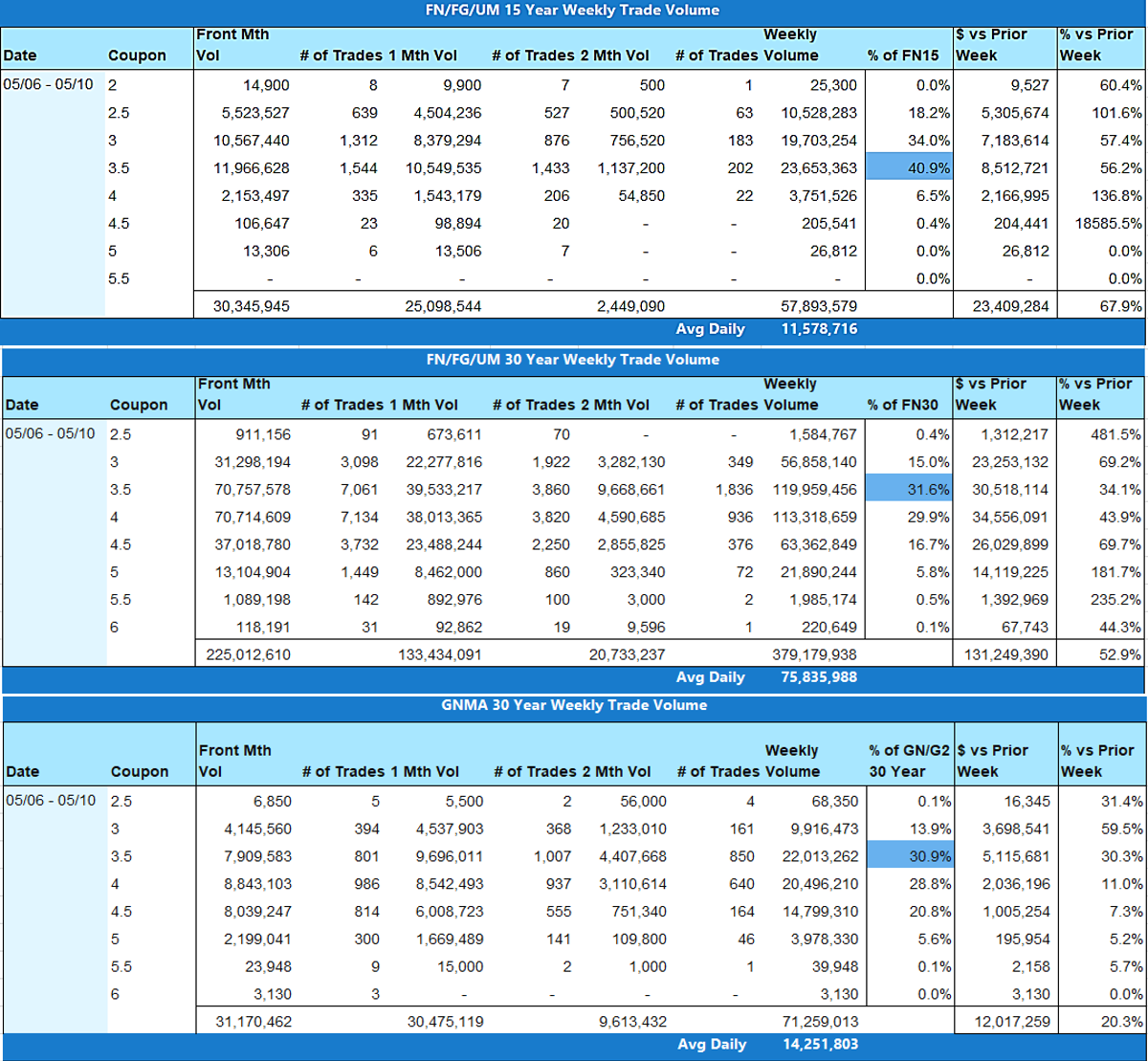 The yield curve steepened last week as trade negotiations between the U.S. and China faltered. The 2-10 spread widened to 19 and 10-Yr yields ended lower at 2.465. The primary/secondary spread ended the week at 82 as rates marched lower with Freddie Mac showing the average 30-yr fixed rate mortgage at 4.1%. Lower mortgage rates combined with a strong job market and modest wage growth should stir homebuyer interest. G230 outperformed in the lower 3.0% and 3.5 coupons as FN30 outperformed in the mid to higher 4.0% and 4.5% coupons.

Weekly mortgage applications rose for the first time in five weeks as interest rates dropped. The Market Composite increased by 2.7% on a seasonally adjusted basis WoW. The unadjusted Refinance index increased 1% with mortgage activity decreasing to 37.9% (the lowest level since November) and the unadjusted Purchase Index increased 5% compared to the previous week. This week, Wednesday’s Retail Sales are important as it will gauge the state of the U.S. consumer and test the Fed’s wager that spending will rebound in Q2. Aside from data, we expect any new unexpected developments in the ongoing trade negotiations between the U.S. and China to hold the most weight and move markets. 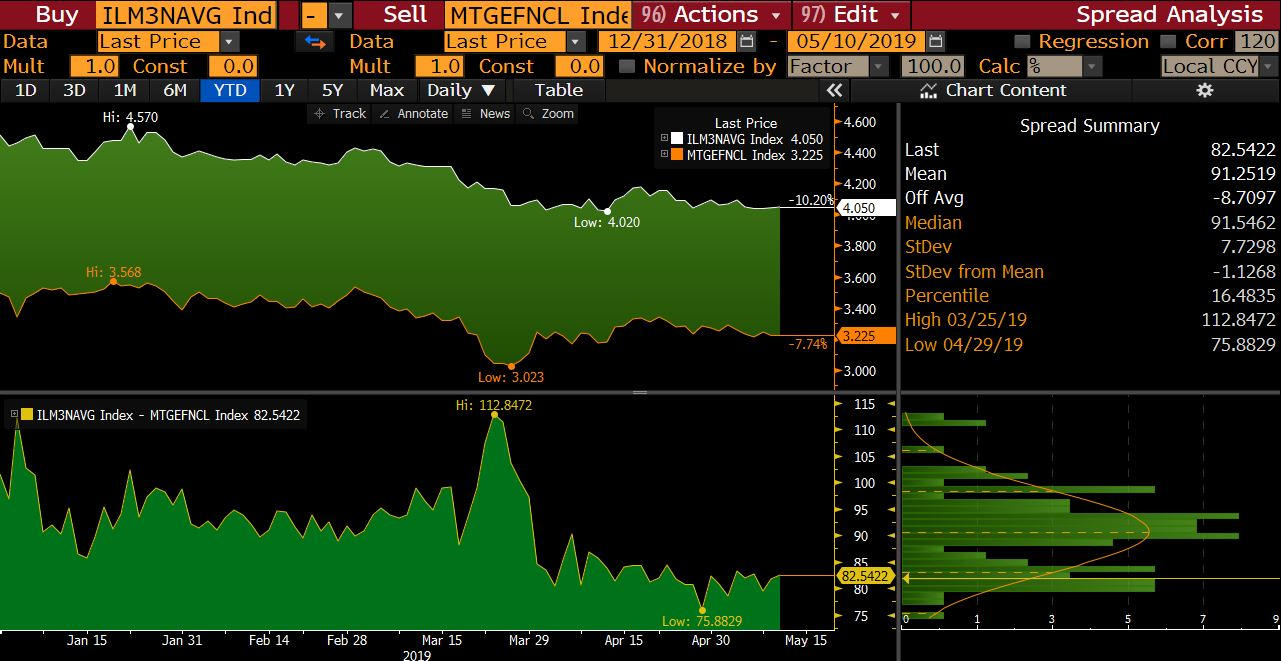 Trade negotiations between the U.S. and China have seen better days as the U.S. increased tariffs at 12:01 am Friday from 10% to 25% on $200 billion in Chinese goods. This move was surprising as many had expected a deal would possibly be signed this week. President Trump ordered the last minutes tariffs because it appears that China is reneging on previous commitments. Specifically, changing laws regarding intellectual property, forced technology transfer, and subsidies. China has now said it will raise tariffs on roughly $60 billion of U.S. imports. U.S. bonds will undoubtedly benefit early from the tit-for-tat but how long that lasts only time will tell. Initial market reaction to the tariffs was muted on Friday and while we may see a rally on Monday any positive rhetoric from the White House may reverse the bond friendly trend.

Friday’s Consumer Price Index disappointed as the index rose a seasonally adjusted 0.3% in April. This fell short of expectations for a 0.4% increase and was largely driven by higher gasoline prices and rent. The Consumer Price Index (CPI) is a measure of the change in the average price level of a fixed basket of goods and services purchased by consumers. Monthly changes in the CPI represent the rate of inflation for the consumer. Inflation is closely watched by the Fed and while these numbers don’t move the needle in either direction regarding lowering or raising rates they do speak to central bank concerns of slower economic demand.

New York Fed President John Williams on Friday in a speech before the 21st Annual Bronx Bankers Breakfast said that the U.S. economy remains positive and the current rate policy is going to keep it that way. Williams said, “The economy remains on a path of healthy growth, with a very strong labor market and without the emergence of inflationary pressures.” He went on to say, “the strength of recent data on economic activity, the rebound of growth in China, and the reversal in the tightening of financial markets all imply that near-term risks to growth have receded somewhat.” Williams believes, just as Powell, that a strong economy will return inflation to 2%.

Figure 6: 10-Yr Treasury notes briefly fall below the 3month bill yield for the first time since Mar. The spread is normally positive to compensate investors for inflation risk.               Source: Bloomberg

The week ahead brings a deluge of data. Notable data releases include Retail Sales (watch closely); Industrial Production; Housing Starts; Jobless Claims; and the Philadelphia Fed Business Outlook Survey. In addition to data this week we’ll hear from a lot of Fed speakers starting on Tuesday with Esther George. Wednesday brings Randy Quarles and Tom Barkin. Neel Kashkari speaks on Thursday followed by Richard Clarida and John Williams on Friday. We will also watch how the recent breakdown in trade negotiations between the U.S. and China effects markets and how the yield curve reacts to these new developments.