10-Yr Treasury yields ended slightly higher and the curve flattened to 14. Trade talks between the U.S. and China appear to be making headway while EU relationships are starting to breakdown. CPI was originally the big-ticket event last week but a huge disappointment in Retail Sales stole the spotlight. In the week ahead, Wednesday’s January Fed Minutes will be highly watched for clues on future rate hikes and any runoff plans for the $4 trillion in bonds and other assets. Thursday brings Durable Good & Existing Home Sales as a number of Fed officials speak on Friday. 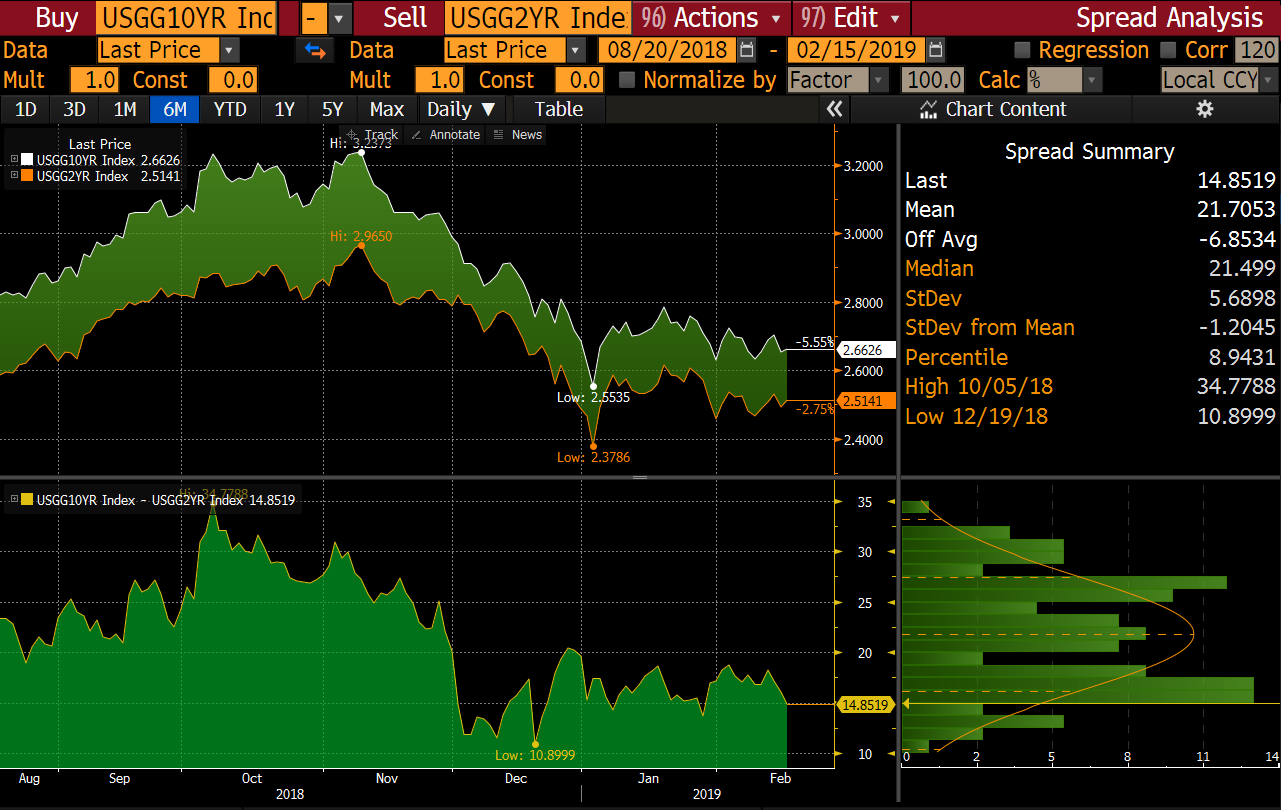 News of a potential deal to avoid the government shutdown hit wires Monday evening, causing Treasuries to drop slightly. The proposed deal included $1.38 billion for 55 miles of border fencing in Texas’s Rio Grande Valley. This was quite short of the $5.7 billion the President initially stated was needed. Yes, there was optimism in the air, until Friday. The President did sign the funding package that provides $1.38 billion for border security. This was followed by President Trump declaring a national emergency on the southern border.

What happens next? Congress could respond by passing a resolution in both houses overriding the declaration but the President has the power to then veto that resolution. This could go to the Supreme Court where the President could be sued and risk hurting his own standing. It’s too early to say what will happen next or what sort of political uncertainty might come from this.

Treasuries faltered and stocks improved on Tuesday in the wake of news that President Trump may extend a March 1 deadline for a trade deal between the U.S. and China. The U.S. is said to be considering a 60-day extension to the tariff deadline. Trade tensions between the world’s two largest economies have heavily dictated stock market movement over the past few months. European trade talks don’t look as rosy as the EU has vowed to retaliate if the U.S. follows through with imposing vehicle tariffs. The EU tariffs would total $23 billion. The renewed threats come after President Trump received the findings of a probe into the national security implications from vehicle imports. 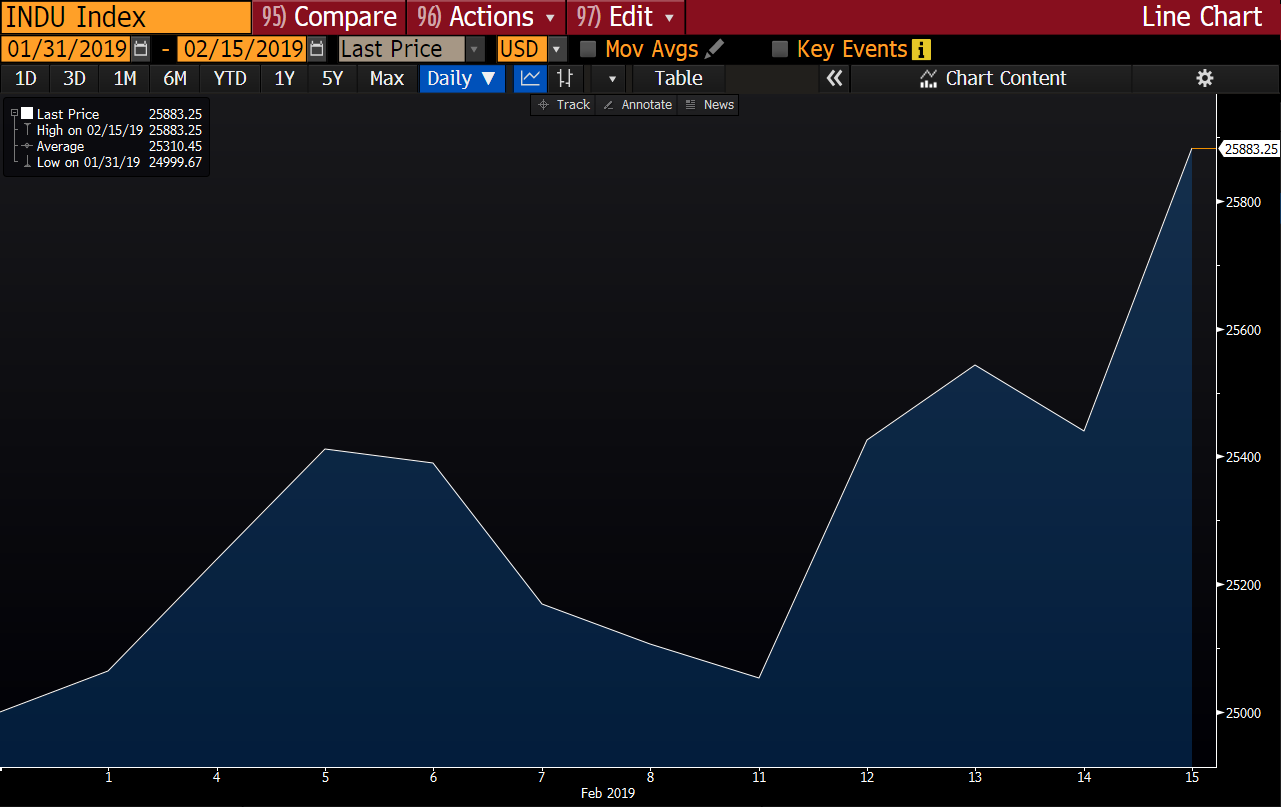 Retail Sales disappointed to the downside with MoM coming in at -1.7%, well below expectations for +0.4%. This is the biggest one-month drop since 2001 (see Figure 3). It is uncertain how much impact the shutdown had on the data, but this reading was well outside the range of normal. It will be interesting to see if that number is revised upwards next month. The Census Bureau addressed concerns by saying, “Data collection and processing were delayed for this indicator release due to the lapse in federal funding from December 22, 2018, through January 25, 2019. Processing and data quality were monitored throughout and response rates were at or above normal levels for this release.” This reading supports the Fed taking the “patient” approach to rate hikes. 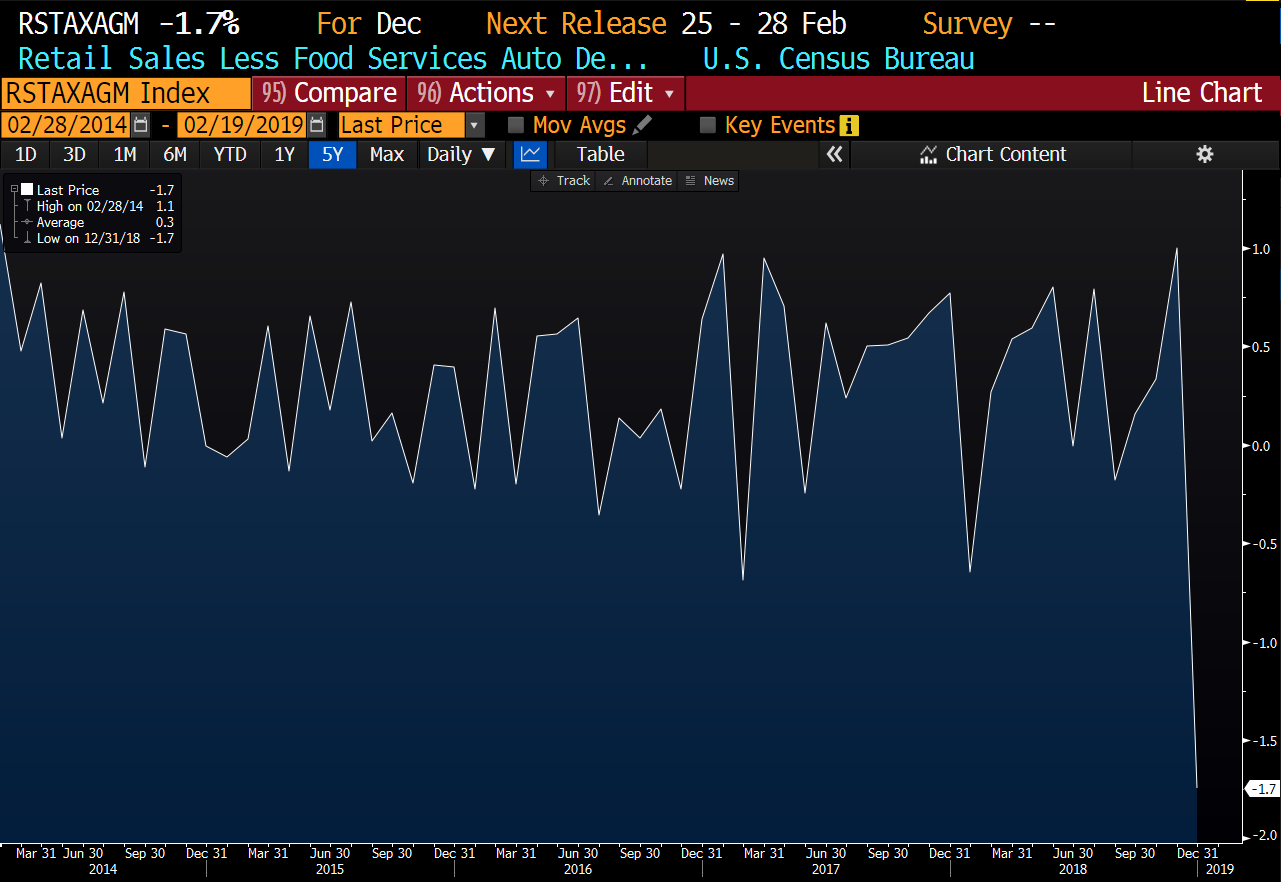 Mortgages started off the week strong versus Treasuries, but as trade tensions eased, mortgages began to underperform. 10-Yr yields ended the week higher at 2.664 and the 2-10 spread tightened to 14. G230 coupons outperformed FN30 across the mid-range stacks (3.500-4.500) with the only exception being in the 3.000 coupon where FN30 outperformed G230. Overall, TBA prices were down week over week.

With the shortened trading week, additional volatility is not abnormal as this week is packed full of data and Fed speakers. It would not be surprising to see Treasuries rally on Tuesday now that markets have had time to digest last week’s events and those still to come this week. 10-Yr yields continue to stay within a tight range (2.63 – 2.78). If we see a break below the 2.63 resistance level, then the next level to watch is 2.55. 2.72 is the first support level followed by 2.75 and then 2.82. Let’s not forget that Treasuries have been heavily influenced by European bonds and any new unfavorable economic releases could easily spill over into U.S. markets. 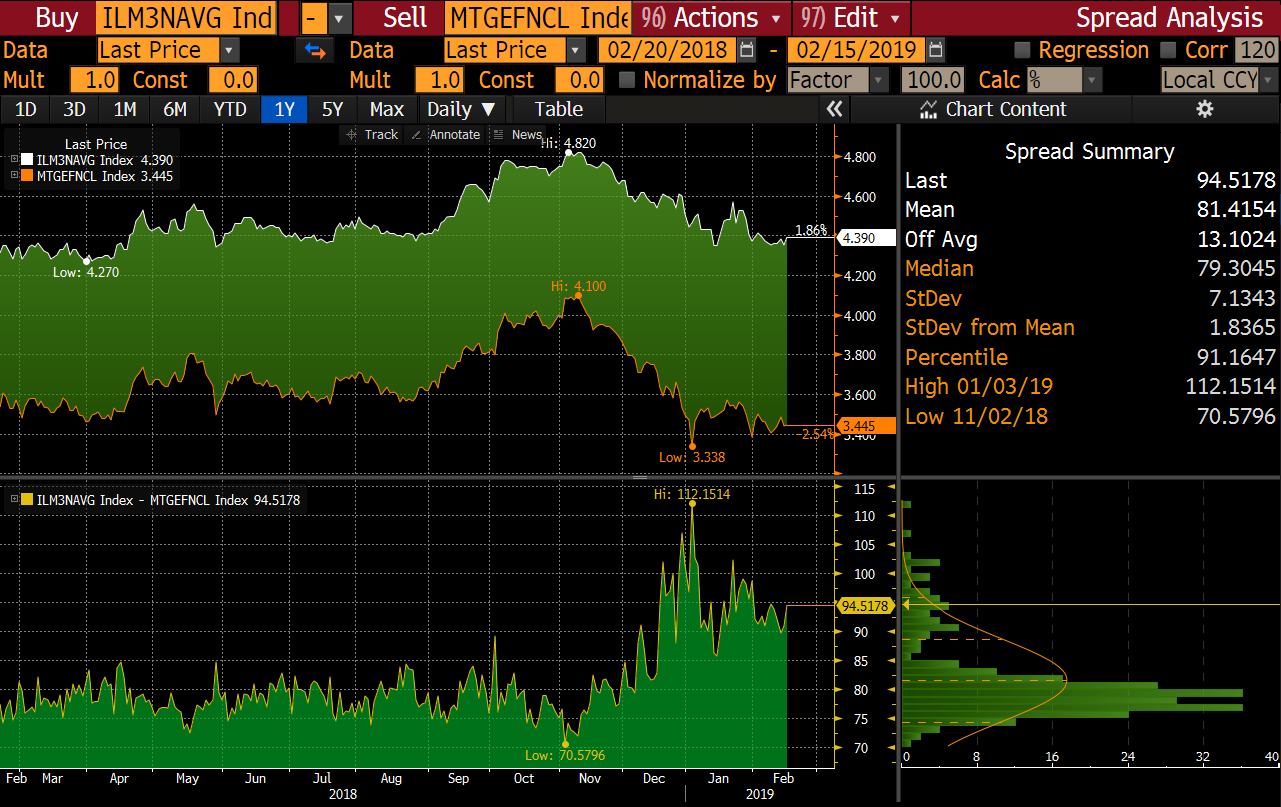 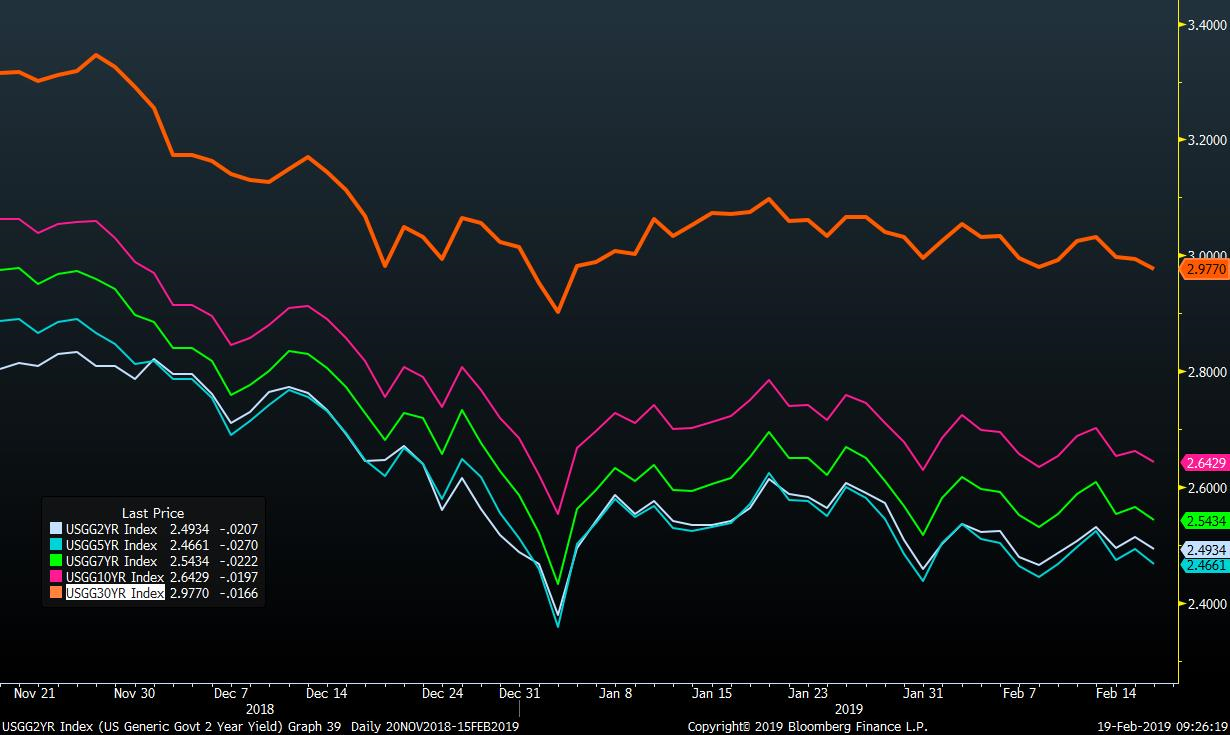 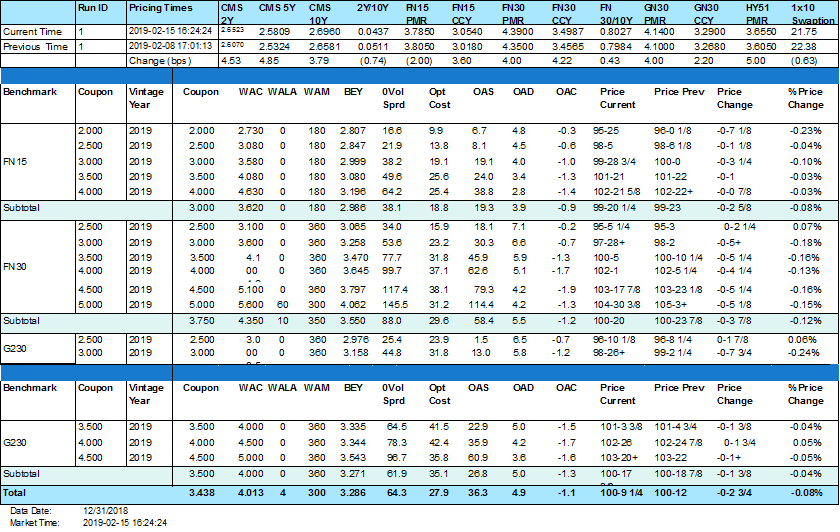 Overall TBA trade volume was down about 4% week over week. However, FNMA/FHLMC 15yr and GNMA 30yr securities did see an uptick in activity as is expected when approaching the front-month settlement date. There was no real significant move in the coupon stacks for the week. 30yr MBS were spread out primarily between 3.5s, 4s, and 4.5s while 15yr securities traded predominantly in the 3 and 3.5 coupons. 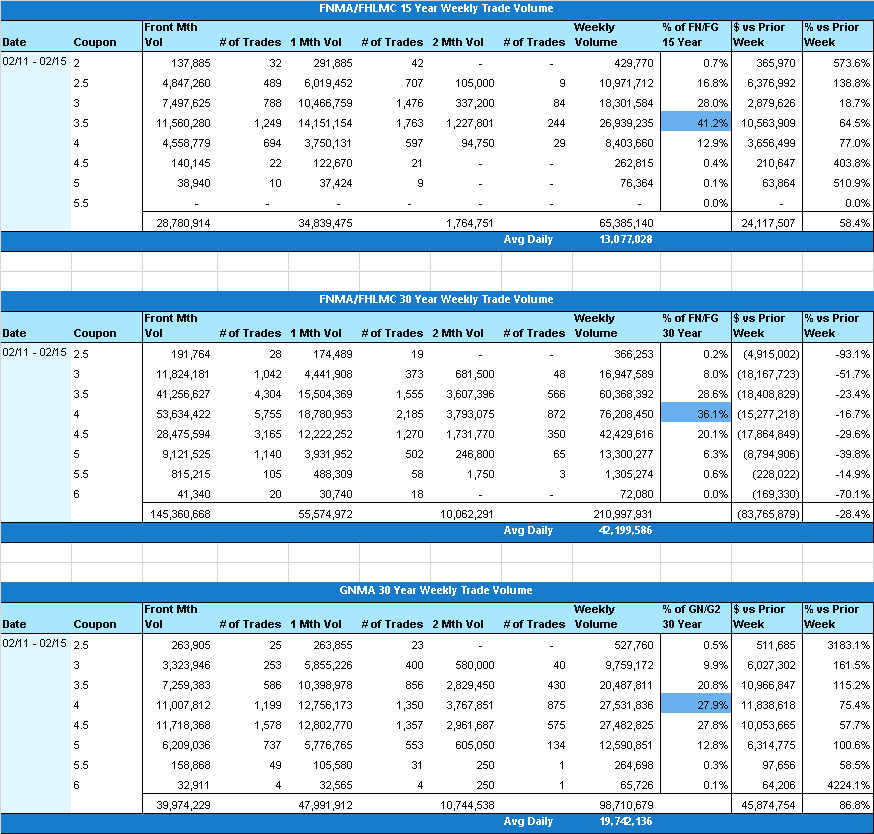 In the week ahead, Wednesday’s January Fed Minutes will be the highly watched for clues as to how officials judge the current economic climate and if they are still biased towards not raising rates. It will also be interesting to find out if they provide insight as to how they plan to complete the runoff of their $4 trillion portfolio of bonds and other assets. Very busy schedule on Thursday with Durable Goods, Existing Home Sales, and Jobless Claims, to name a few. Friday is all about Fed speakers with John Williams, Patrick Harker, and James Bullard all speaking. 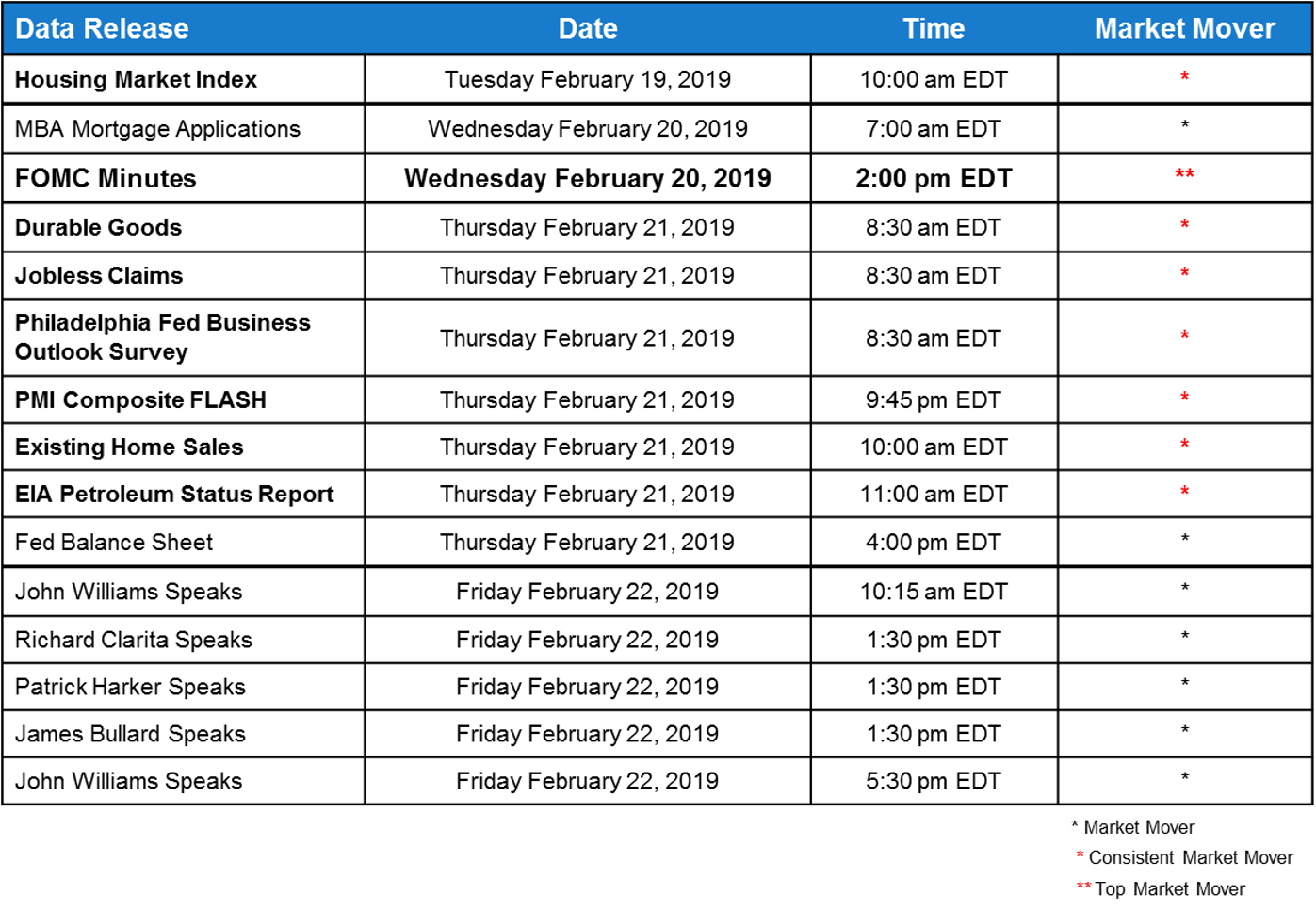