Data and dovish sentiment moved markets this past week.

New Home Sales and Non-Farm Payrolls made a strong showing while Consumer Confidence and Chicago PMI disappointed to the downside. Wednesday’s FOMC minutes stayed on the dovish path with the removal of key verbiage regarding the economic outlook and brought up the recent discussion around the balance sheet. 10-Yr yields ended the week lower after running into hurdles on Friday and the 2-10 finished wider after dropping below 15 mid-week. Powell speaks on Wednesday evening after markets close. It will be interesting to see if he makes waves and how foreign markets respond before the U.S. open. 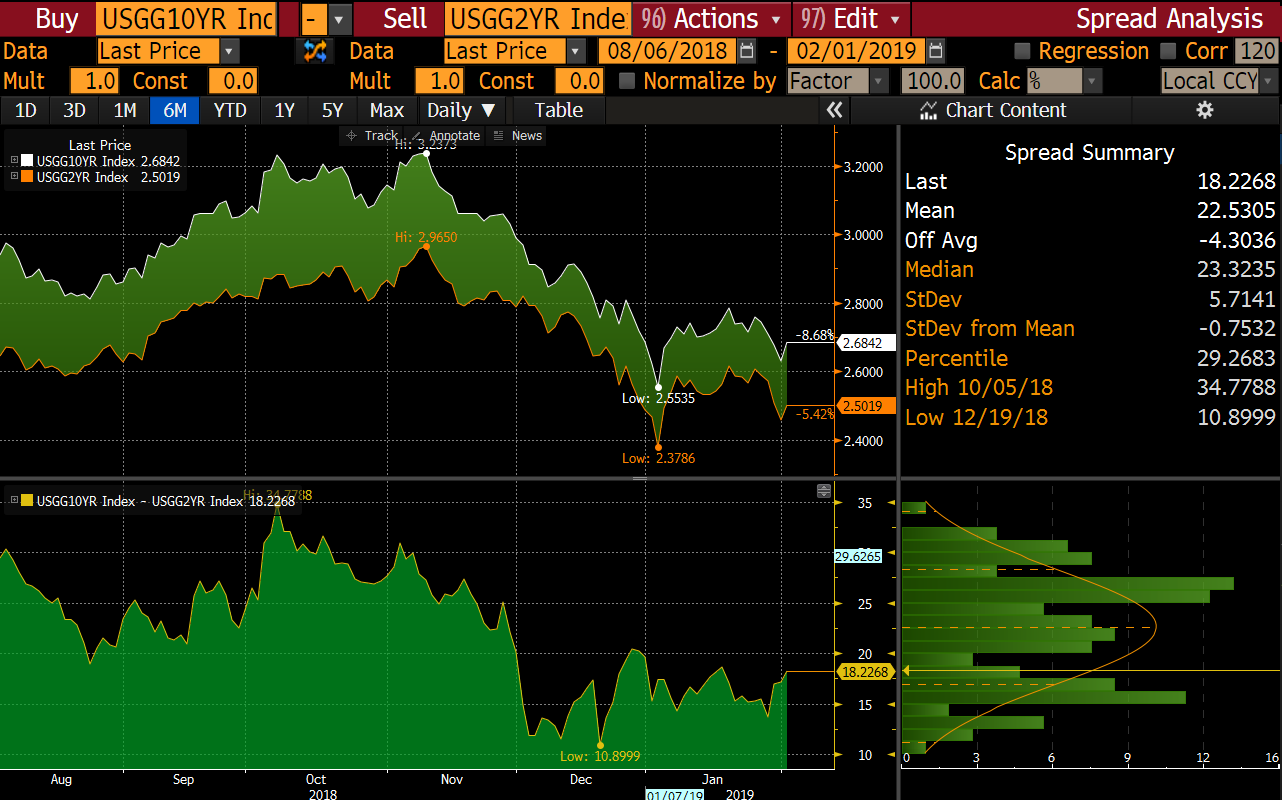 The curve widened with continued dovish sentiments from the Fed and jobs data, surprising to the upside.

Rollercoaster week for data as the jobs reports and New Home Sales surprised to the upside. Not all data was released. This includes GDP, International Trade in Goods, and Core PCE. On Thursday New Home Sales surprised to the upside at 657k vs. a forecast of 570k. The 16.9% increase is the largest since 1992 and well above the 4.8% consensus. It’s too early to say if this is the beginning of a rebound in housing and only time will tell. Friday’s job data was surprisingly strong as Non-Farm Payrolls came in at +304k vs. forecasts of +165k. This is mainly a reflection of the -90k revision to last month’s number. The unemployment rate rose to 4% which can be attributed to the 0.2% increase in the Labor Force Participation Rate.

The unemployment rate rose to 4% which can be attributed to the 0.2% increase in the Labor Force Participation Rate.

Wednesday’s FOMC minutes showed that the Fed is staying on the “patient” path. The recent addition of “patient” into the policy statement more than likely means that rate hikes are off the table until midyear at the earliest. More members see short-rate policy as neutral and dropped the language from the previous statement that had said risks to the economic outlook were roughly balanced. The Fed did address the balance sheet. “The Committee is prepared to adjust any of the details for completing balance sheet normalization in light of economic and financial developments. Moreover, the Committee would be prepared to use its full range of tools, including altering the size and composition of its balance sheet, if future economic conditions were to warrant a more accommodative monetary policy than can be achieved solely by reducing the federal funds rate.” It will be interesting to see if or when the Fed changes the current balance sheet runoff and the reasons associated with that change. 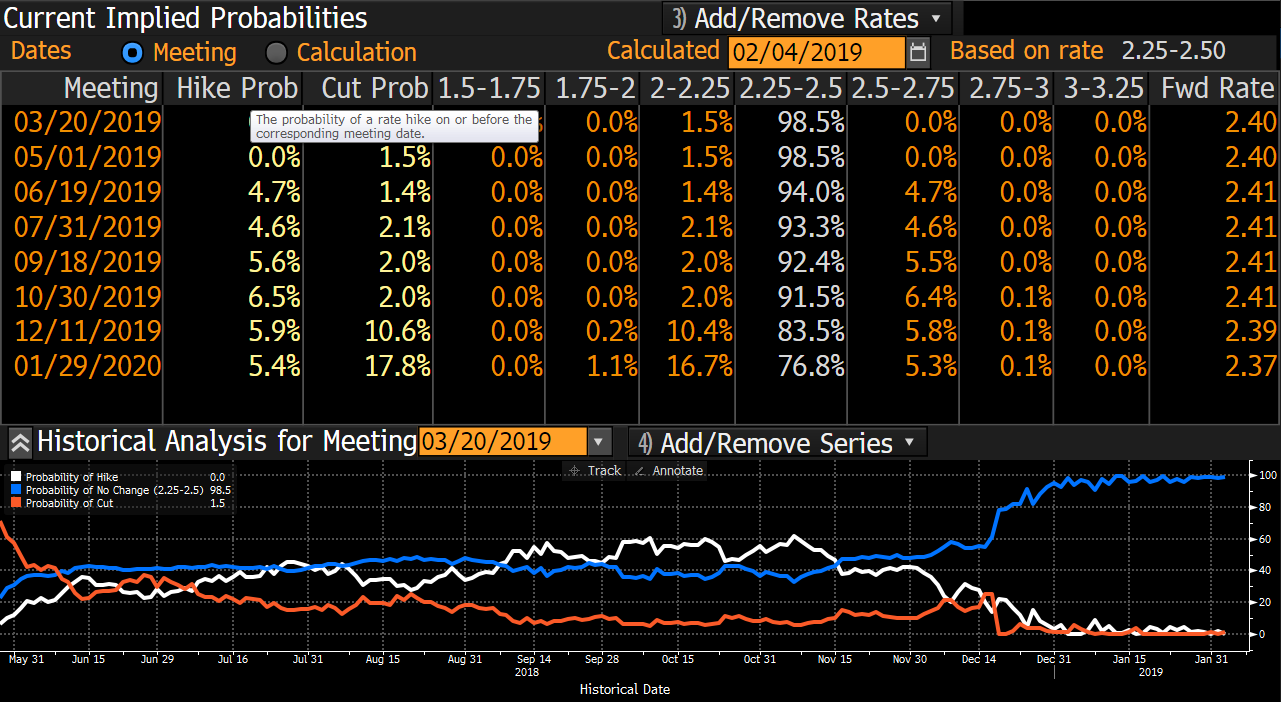 Recent dovish comments by the Fed have markets leaning towards a cut instead of a hike.

10-Yr yields ended the week lower at 2.688 after reaching as low as 2.619 on Thursday. Treasuries rallied after the Fed’s comments on Wednesday but strong job reports on Friday caused a major reversal as 10-Yr yields backed off 15 ticks.

The 2-10 spread at one point had tightened to 14 but ended the week wider at 17. For the past two months, the curve has been primarily trading between 10 bp and bp. On Friday mortgages lagged treasury hedge ratios. 30-Yrs were wider by 3-4 ticks vs. 10-Yr’s led by lower coupons and 15-yr’s were weaker by 1+ tick vs. 5-yr treasuries.

The primary/secondary spread tightened to 86 and G230/FNCL spreads remained close to unchanged. There is additional supply from auctions this coming week, with focus on the 10-Yr auction Wednesday. A poor showing could easily push the curve near or over 20. Stocks ended the week stronger finishing at 25,063. 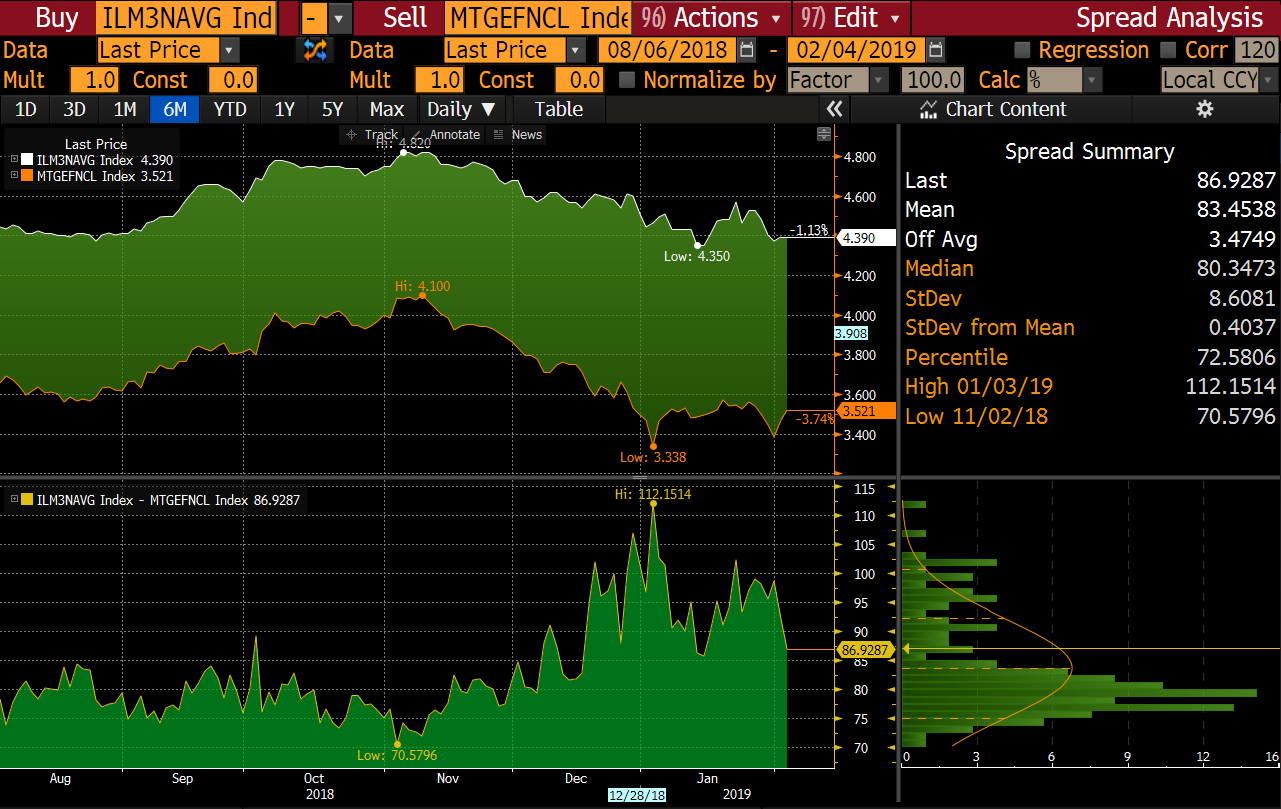 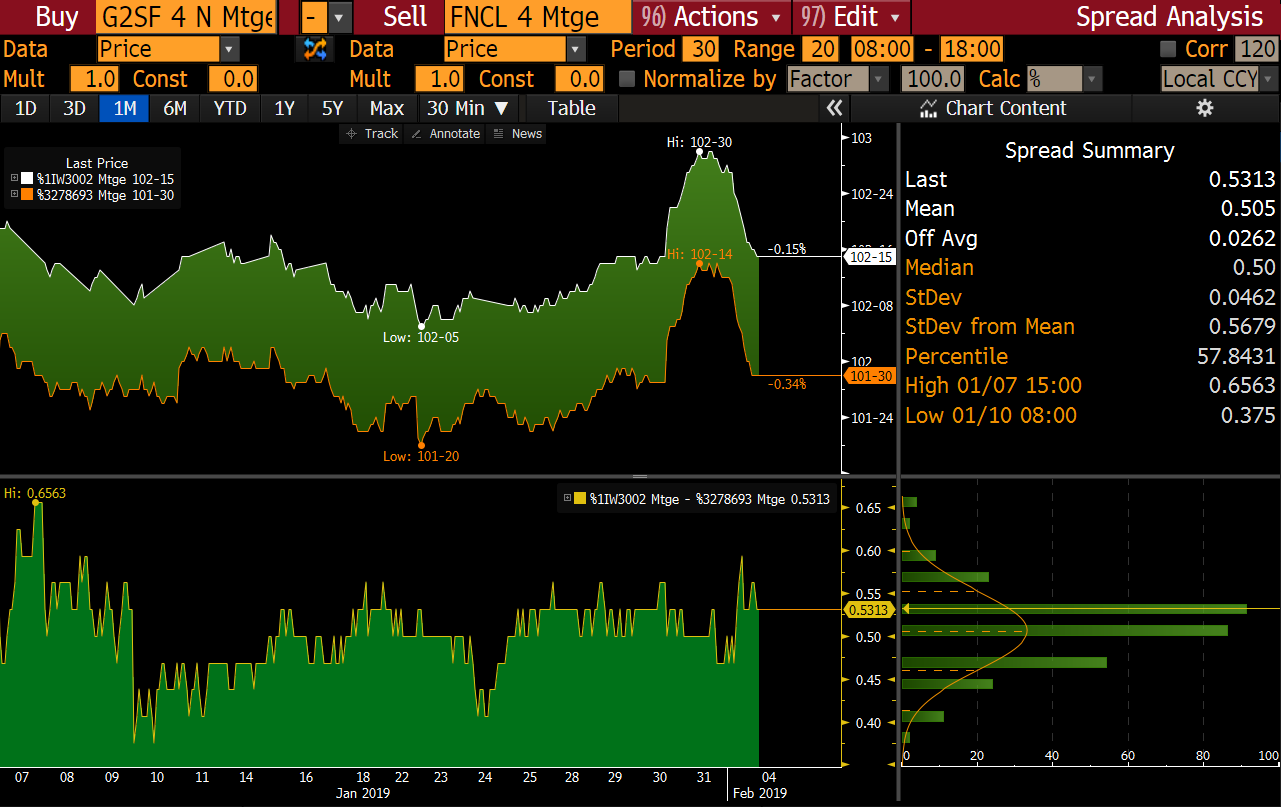 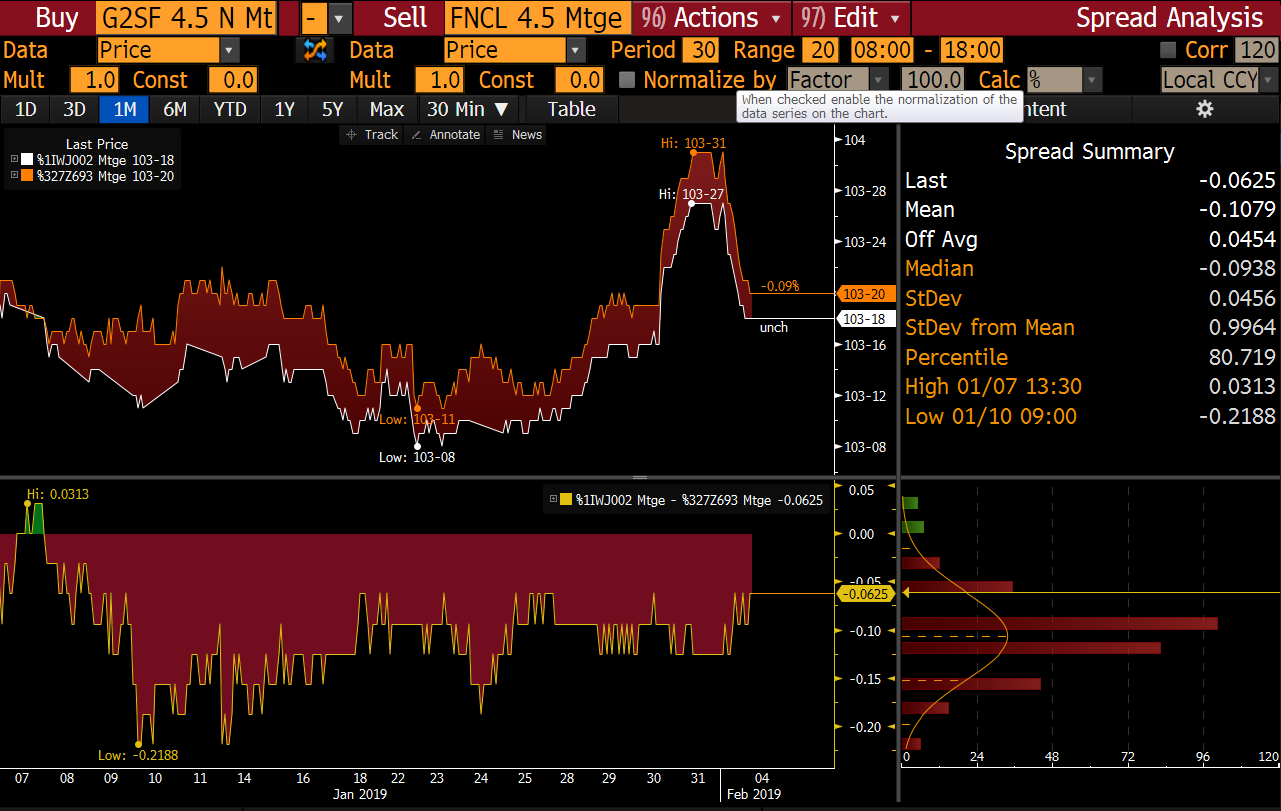 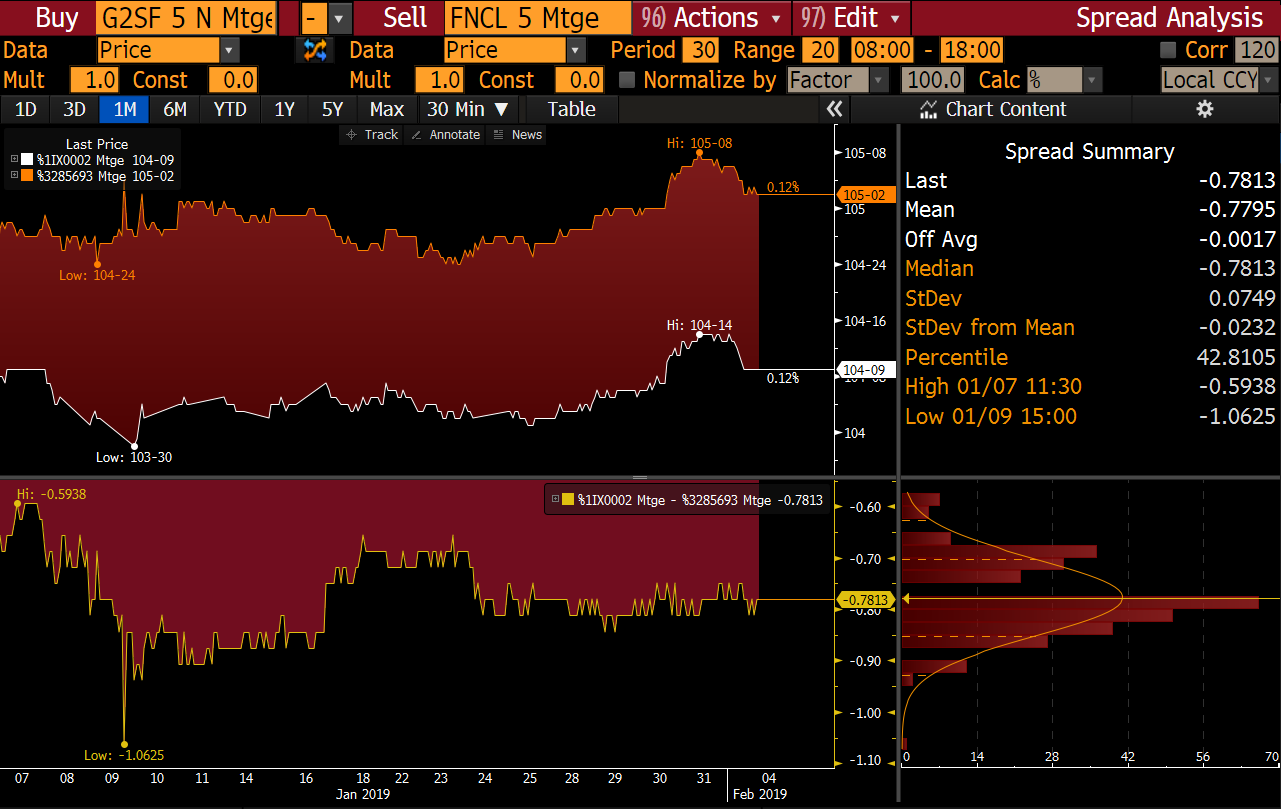 This coming week is lighted on the data side. Treasury auctions will be held Tuesday through Thursday with the $27B 10-Yr note auction being the most watched. Not listed below but very important is Jerome Powell’s speech Wednesday evening at 7:00 pm in Washington D.C. This will be his chance to either walk back some of his previous comments or continue the current dovish rhetoric. 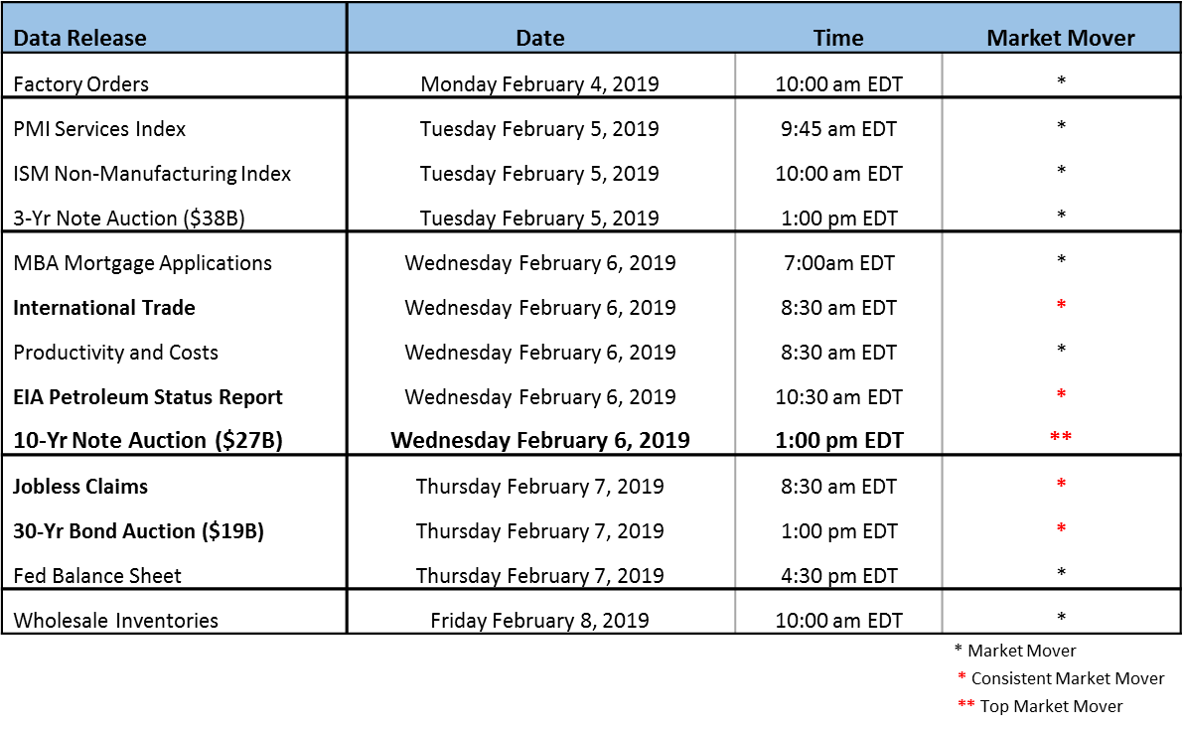